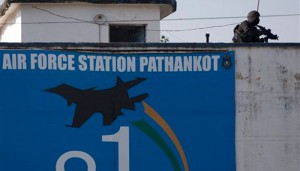 NEW DELHI: A day after intelligence sources claimed that India has identified Jaish-e-Mohammad chief Maulana Masood Azhar and three others as the mastermind of the Pathankot airbase terror attack, a report on Friday claimed that the two phone numbers to which calls were made by the perpetrators are of Pakistan.
A report published in ‘The Times of India’ said that two numbers – 92-3017775253 and +92 300097212 to which calls were made by the two of the six terrorists, who had attacked the crucial airbase in Punjab, are from Pakistan.
According to the report, the first number probably belongs to the mother of one of the militants, while the second one belongs to one of the handlers of the attackers.
The security officials have also told ‘TOI’ that one of the Pakistan-origin terrorists, who had infiltrated into Punjab, addressed his handler as ‘Ustaad’, while divulging information about their movements in the northern Indian state.
The terrorists made the calls through taxi driver Ikaagar Singh’s phone.One of the terrorists made a call to +92-3017775253 from the cell phone of jeweller Rajesh Verma, who was carjacked with Punjab SP Salwinder Singh.
JeM chief, his brother Abdul Rauf Asghar and two others have been identified by the intelligence agencies as ‘handlers’ behind Pathankot airbase terror attack.
Other than Azhar and Rauf, the other two handlers are Ashfaq and Kashim, the sources said.Seven security personnel were killed in the attack early Saturday morning on the Pathankot Air Force Station by six terrorists who crossed over from Pakistan. All the six terrorists were finally killed by security forces later.
Meanwhile, India on Thursday said that after the terror attack on the IAF base in Pathankot in Punjab the ball was in Pakistan’s court on continuation of the resumed bilateral talks.