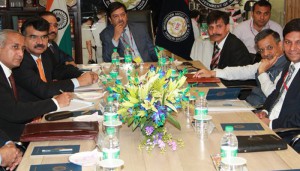 NEW DELHI: Union Home Minister Rajnath Singh today said Pakistan has for the first time acknowledged that the terror attack in Pathankot had its roots in that country.
During an election rally in Thowra assembly constituency of Assam, Mr Singh said, Pakistan had been continuously saying that it has no involvement in militant and terror activities in India. He said, however now it has acknowledged the Pathankot attack and filed an FIR. He said, Pak probe team has come to India and our team is going to Pakistan.
Mr Singh said, the change has come due to Prime Minister Narendra Modi’s astute and positive political capability. He said, all the countries of the world are acknowledging that India’s strength is increasing.
Top officials of India’s anti-terror probe agency NIA, who held wide-ranging talks with the Joint Investigation Team (JIT) from Pakistan, have sought the voice samples of Maulana Masood Azhar, chief of terror group JeM and his brother besides details of a trust run by the outfit.
On the other hand, Pakistani probe team will record statement of witnesses in connection with Pathankot terror probe from Thursday.
Pathankot terror attack: ‘India seeks access to JeM chief Masood Azhar’The team will also record statement of Superintendent of Police rank officer of Punjab, Salvinder Singh.
Pakistani JIT was handed over a list of 300 questions by the NIA during the day-long deliberations that took place at the latter’s headquarters.
NIA gives proof of JeM’s role in Pathankot terror attack to Pakistan’s JITPak has acknowledged Pathankot attack originated from its soil: Rajnath SinghThe JIT arrived here this week for a probe into the Pathankot terror strike by Pakistan-based JeM.

The Pakistani team was taken to various spots in Pathankot yesterday, including the ‘crime scene’ inside the air base.
The team is headed by Chief of Punjab’s Counter Terrorism Department (CTD) Muhammad Tahir Rai and comprises Lahore’s Deputy Director General Intelligence Bureau Mohammad Azim Arshad, Inter-Services Intelligence (ISI) official Lt Col Tanvir Ahmed, Military Intelligence official Lt Col Irfan Mirza and Gujaranwala CTD Investigating Officer Shahid Tanveer.
Pathankot attack: JeM chief Maulana Masood Azhar is in preventive custody, confirms Pakistan JIT
They are scheduled to return on April two.
On the intervening night of January 1-2, terrorists had struck at the strategic Indian Air Force base in Pathankot and in the ensuing gunbattle seven security personnel had been killed.Bodies of four terrorists were also recovered after the fierce encounter that lasted over 80 hours.
Pathankot attack: Pak JIT to record statements of witnesses from ThursdayThe bodies of the perpetrators have been kept at a morgue in Pathankot.