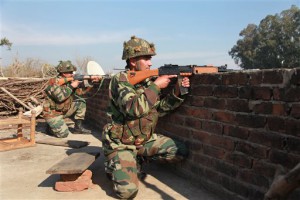 NEW DELHI: All three men, including Punjab police officer Salwinder Singh, who were allegedly abducted by the terrorists who launched an attack on the Pathankot air base on Saturday, are being questioned by the National Investigation Agency, which is in charge of the case.
Police say there are many inconsistencies in the statement of the men, including on basic issues like how many terrorists had abducted them.Senior officer of the NIA, Sharad Kumar, refused to divulge details. “I can’t say anything lightly. After the recent media reports, we will question him (Mr Singh, a Superintendent of Police),” he told to a T V Channel.
The Pathankot attack, which took place before dawn on Saturday, martyred seven military personnel and injured another 20 at the sprawling base where attack helicopters and fighter jets are kept. All six terrorists are dead, Defence Minister Manohar Parrikar has said. The operation, which is on its fourth day, is likely to end today.

The abduction of Mr Singh is said to have raised the alarm that enabled the authorities to prepare for the attack and save the assets of the air base. But now questions are being raised about the abduction and the contradictions in the men’s statements.

Mr Singh, his cook Madan Gopal and a jeweller, Rajesh Verma — have said were on their way to Gurdaspur after a visit to a shrine in Pathankot on Thursday in Mr Singh’s official car when they stopped by the terrorists dressed in army fatigues.
The abductors dumped Mr Singh and his cook Madan Gopal in a forest, and drove off with Mr Verma. Mr Verma, who was left injured in the car, has survived. They had apparently used the vehicle to reach the air base – it was found abandoned nearby.

There have been conflicting versions on how many terrorists had abducted the men. Officials say this is a key issue, since the terrorists are believed to have attacked the base in two groups of four and two men each.The men claim they were unable to give exact details since they were blindfolded, bound and gagged.

“There is nothing dodgy about what I have reported. Hang me if I have done something wrong,” Mr Sing.”They didn’t know I was a police officer,” Mr Singh has said as way of explanation for why the attackers did not kill him. The driver of another car the terrorists hijacked earlier had been left with his throat slit. The terrorists had abandoned the vehicle after a tyre had burst and flagged down Mr Singh’s car.