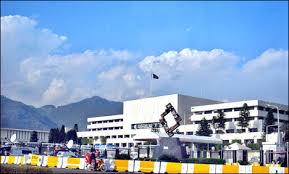 ISLAMABAD: Pakistan’s parliament on Thursday unanimously passed a resolution against the alleged “unprovoked and indiscriminate” ceasefire violations by India and asked the government to seek UN intervention to resolve the Kashmir issue.
The resolution, moved by Prime Minister Nawaz Sharif’s Adviser on Foreign Affairs Sartaj Aziz, stated that the National Assembly condemned Indian ceasefire violations at the Line of Control (LoC) and the International Border (IB).It strongly condemned unprovoked and indiscriminate ceasefire violations by India on LoC and IB resulting into loss of human and material losses.
13 Pakistani nationals have been killed in exchange of fire since September 13.It called upon the Government that while pursuing bilateral dialogue with India, the issue should be raised at the UN and with the international community urging them to play their role in resolution of Kashmir dispute in accordance with the wishes of Kashmiri people.
Defence Minister Khawaja Asif said Pakistan’s military was capable of responding to all aggression. He said that India was mistaken if it thought Pakistan’s internal issued could be used to its advantage.”India should not misunderstand Pakistan’s initiative towards peace as our weakness…We can respond effectively,” Asif said.

He said that both countries were nuclear and should refrain from any kind of misadventure.The house also expressed concern over the plight of people of Kashmir living under “Indian occupation.”
Meanwhile, Foreign Office Spokesperson Tasneem Aslam alleged that Indian forces under the cover of unprovoked firing were engaged in constructing bunkers in locations within 500 metres of the IB.The construction of these bunkers is in violation of the 2010 agreement between New Delhi and Islamabad, she said.
“Pakistan would never permit this construction which is in violation of a bilateral agreement,” Aslam said.The agreement prohibits any construction, including that of bunkers, within 500 metres of either side of the international boundary.
Pakistan’s Punjab provincial assembly had yesterday unanimously adopted a resolution condemning “Indian aggression” at the IB and urged the international community to take note of the situation.