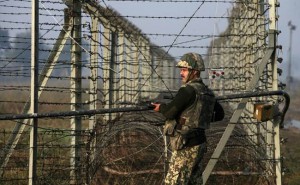 JAMMU: Pakistani forces targeted 12 Indian posts late last night along the International Border in Jammu and Kashmir, at an area where cross border firing killed an Indian jawan and four Pakistani soldiers hours before.Reports suggest that a civilian was injured in mortar shelling by Pakistani troops through the night in Samba district, 41 km from Jammu. This is the third ceasefire violation by Pakistan in two days.
Pakistan had on Wednesday evening summoned Indian Deputy High Commissioner JP Singh in Islamabad to register protest after four of its rangers were killed in retaliatory fire by India after a jawan was killed. Pakistani Rangers had fired on Indian soldiers patrolling the border.
Indian troops stopped firing when the Rangers raised a white flag, asking for time to remove the bodies. Union Home Minister Rajnath Singh, after being briefed about the death of Constable Ram Gowria, had asked the forces to give a “suitable and appropriate reply for any such unprovoked firing,” an official statement said.
Pakistan said it had summoned the Indian envoy to protest against the “Shahadat (martyrdom) of two personnel of Pakistani Rangers”. On Tuesday, Defence Minister Manohar Parrikar had said the Indian army would retaliate with “double the force” to any ceasefire violation by Pakistan.
Cross-border violence has, in recent months, been the worst in over a decade. In October, at least 20 civilians were killed on both sides. The worst violence was in the Kashmir Valley in early December, when terrorists killed 11 Indian soldiers and police in the middle of elections in the state.
India summoned Pakistani High Commissioner Abdul Basit earlier this week to protest against the possibility of 26/11 mastermind Zakiur-Rahman Lakhvi walking free.
Lakhvi, who was arrested in 2009 for orchestrating the Mumbai attacks, was granted bail by a Pakistani court on December 18, drawing strong condemnation from New Delhi. Pakistan this week arrested him in another case, ensuring that he remains in jail for now. Pakistan had said it will appeal against his bail in the Supreme Court.