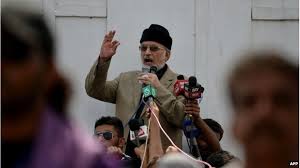 ISLAMABAD: A group of hackers in Pakistan hacked several government portals, including that of the Army, and leaked 23,000 bank records in a bid to support the ongoing anti-government protests in the country, the Dawn reported. ‘Islamabad Administration has reported that police used 10,000 gas shells, 1000 chemical gas, 5000 rubber bullets on protesters demanding resignation of Nawaz Sharif’ said Imran KhanImran Khan tweeted that he has rescued KP PTI MPA Iftikhar Mashwani from illegal detention for three days in secretariat Thana.
According to reports, around 6 people have got injured in the clashes. Violent clashes have resumed between protesters and police in Islamabad. The police have resorted to tear gas shelling and lathi charged the protesters.Former captain of Pakistan’s cricket team Javed Miandad has come out in full support of Imran Khan.Chief Justice of Pakistan Nasir-ul-Mulk has cancelled the holidays of all the judges and has summoned them to Islamabad. Some reports are doing the round that the Pakistan Army Chief Raheel Sharif has advised Nawaz Sharif to step down.
However, the government has completely denied any such claims, stating the reports ‘baseless’. Meanwhile, Sharif is holding meeting with leaders and representatives of Opposition parties. An FIR has been registered against Tahir-ul Qadri and Imran Khan and their activists accusing them of terrorism, a Dawn news report states.PM Nawaz Sharif is likely to address a joint session of the Parliament which has been called on Tuesday morning and will discuss the ongoing political crisis that the country is facing.
The Pakistan Supreme Court has asked PTI and PAT lawyers to discuss with their leaders as to what role they want the apex court to play in the ongoing crisis, the Dawn reported.Nawaz Sharif’s daughter, Maryam Nawaz Sharif, took to Twitter today and said that even Pakistan’s enemies cannot create such a situation in the country. Army chief meets Nawaz Sharif at PM House to discuss the crisis, according to Dawn news report.
Pakistan Tehreek-i-Insaf (PTI) spokesperson Dr Shireen Mazari has condemned the attack on PTV building and said that the attackers should be punished.He took to Twitter to condemn the action and clarify PAT’s stand. Qadri has also asked his supporters not to violate directives issued by the Army. He further said that if any protester is inside the PTV building, then they should step out of the premises immediately.
Khan tweeted from his official Twitter handle that PTI workers did not attack the PTV premises.Army troops were rushed to the PTV office and are securing the PTV building. The channel broadcast has resumed. Protesters break the gates and enter the premises of Pakistan TV and have stopped the broadcast. Transmission of the news channel was cut minutes after an anchor announced demonstrators had entered the building and “besieged” staff, the AFP reported. Qadri, while addressing his protesters, said that talks were held with the government several times but they failed as the country’s leaders don’t believe in Constitution, law and democracy, the Dawn reported.The protesters have reached outside the residence of Prime Minister Nawaz Sharif, as per Dawn news report. According to a report PAT leader Tahirul Qadri has begun moving towards the Pakistan Secretariat in a vehicle.. 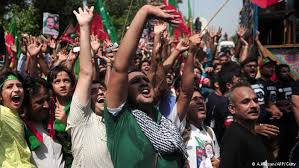 They are also headed towards the residence of Prime Minister Nawaz Sharif as the deadline given by PTI chief looms.Protesters have broken the entrance of Pakistan Secretariat and entered the premises.The protesters are armed with sticks and wearing gas masks as well.Pakistan police does not have the permission to open fire. Security has been tightened after PTI and PAT protesters are being encouraged to move towards Prime Minister Nawaz Sharif’s residence and war songs are being played on loudspeaker.
Pakistani Army takes over security of Islamabad, after protests led by Pakistan Tehreek-i-Insaf (PTI) chief Imran Khan, Pakistan Awami Tehreek (PAT) leader Tahir-ul-Qadri continued on Monday. The Nawaz Sharif government has been witnessing anti-government protests for over two weeks led by PTI and PAT demanding his resignation claiming that last year`s elections were rigged.Demanding the resignation of Prime Minister Nawaz Sharif, the protesters have refused the move from the Islamabad’s Red Zone area and are camping outside government offices.
A meeting of the top Army personnel took place at General Headquarters on Sunday night in which they expressed concern over the ongoing political crisis in the country. The Army also cautioned people against using force after three people were killed in the violence during the protests and hundreds others injured.