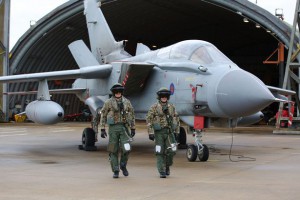 LONDON: David Cameron has repeated claims the bombing campaign in Syria will require “patience” and will not be over quickly.The Prime Minister spoke as RAF Tornados conducted air strikes on six targets in Syria, “successfully” attacking an IS-controlled oilfield.
Speaking to the BBC, the Prime Minister warned pilots and their families to be braced for a long and difficult job.He said: “It is complex and it is difficult what we are asking our pilots to do, and our thoughts should be with them and their families as they commence this important work.”
The decision to approve the mission was “good for the country”, the prime minister said.He added: “There was a compelling case for extending our air strikes from Iraq to Syria, and I was glad to see such strong support right across parliament.”
Yesterday Foreign Secretary Philip Hammond told BBC2’s Newsnight that Britain’s military action in Syria would not be over in a matter of months. 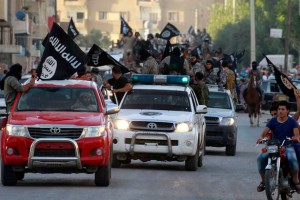 Speaking on the programme, Mr Hammond said: “I cannot believe us stopping air strikes against Daesh (ISIS) in Raqqa for so long as they represent a threat to us, a threat to British citizens and a threat to the British homeland.”No, we would have to continue with those air strikes.”
Pilots and ground crew prepare a Tornado at R.A.F. MarhamAsked if the air strikes would continue for as long as four years, Mr Hammond said: “I hope it won’t be four years, but I caution that it isn’t going to be months.”
A ground war to finish off IS will not be possible until a political settlement to the Syrian civil war is reached and rebel groups, the Damascus government and the Kurds are all able to turn their fire on the terror group, he said.
If this is not delivered within two years, as planned by the Vienna peace talks, “that won’t mean that we give up and go home”, he said.
Militant Islamist fighters waving flags Preparations: ISIS targets have already been bombed.”We have got to find a political solution to the civil war in Syria.
“There is no military solution, there can only be a political solution to that civil war.”But Mr Hammond said air strikes would have the immediate effect of “degrading Isil’s ability to plan and execute external attacks, so just starting those air strikes – even before we get anywhere near a ground assault on Raqqa – will improve the safety of Britain, of France, of Europe and of British and French people and others, wherever they are in the world”.