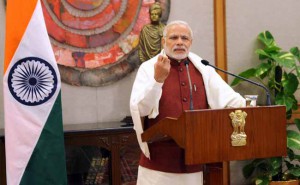 NEW DELHI:
Kick-starting its ambitious Start-Up Mission, the government on Saturday promised to prioritise such measures for greater employment generation and said it was committed to ensuring start-ups a friendlier regulatory regime, easier capital availability as well as quicker exit norms through a bankruptcy law.
The Start Up India mission envisages technology business incubators and research parks. Prime Minister Narendra Modi  announced opening app-based registration for companies to be completed in a single day, a startup fund of Rs. 10,000 Crore and waiver of capital gains tax for startups among the several allowances that government has decided to make for startups.
“There will be no income tax on startups’ profits for three years,” PM Modi announced amid resounding applause from a large gathering at the Vigyan Bhawan in New Delhi that included over 1,000 entrepreneurs gathered at the Startup India meet up organised by the government.
Unveiling a long list of doles for startups, Mr Modi said the government has decided to step back and minimise interference of the government. “We are here today to find out from you what the government should not do,” PM Modi, who has often repeated the slogan ‘minimum government, maximum governance,’ said, “If the government pulls back, a lot can happen.”
Mr Modi has often reiterated that the government is committed to improving the ease of doing business in India. Under the Modi government, India jumped 12 places on the World Bank’s Ease of Doing Business Rankings that ranks nations, from 142 last year to position 130.
Mr Modi announced self-certification based compliance for startups. Under the plan, startup will not face government inspections, considered a vestige of the pre-liberalisation licence regime by businesses, to reduce government interference. “You will be able to register a startup in a day on a mobile app. It will have a small application form. The registration will be in the same process,” he said.
The government’s other decisions, which he announced, include: A fast track mechanism for filing patents for startups, 80 per cent rebate for filing patents by startups and relaxed norms for when government, which is one of the largest buyer of goods and services in the country, procures from startups. “There will be no compromise on quality but the idea is to give the new enterprises opportunities,” he said.
Lauding entrepreneurs, Mr Modi said, “Those who begin startups, money is a byproduct for them. They want to make difference to people’s lives…If it gives jobs to 5 people, a startup is taking my country forward.”