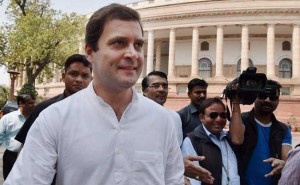 NEW DELHI: The government has dropped the controversial proposal to tax pension withdrawals, caving in after an outcry by salaried workers. Congress vice president Rahul Gandhi claimed the retraction was the result of his efforts.
“I felt middle-class people were being hurt by the government, so I decided to put some pressure on the government…my pressure did work,” said the 45-year-old, who had attacked Prime Minister Narendra Modi over the proposal.
In his Budget presented at the end of February, Finance Minister Arun Jaitley had proposed taxing lump-sum withdrawals exceeding 40 per cent of an individual’s retirement pot in the Employees’ Provident Fund (EPF), unless the sum is reinvested in an annuity. At present, withdrawals from the EPF are tax-free.
According to Sources over the weekend that the PM intervened directly to ask for the controversial budget announcement to be shelved.The tax proposal sparked a backlash from the professional class, with some calling it a raid on the retirement savings of honest taxpayers.
Only around 36 million of the country’s 1.3 billion people contribute to the EPF, but the tax proposal could have dented the government’s image ahead of elections in five crucial states including Bengal and Tamil Nadu.”The policy objective is not to get more revenue but to encourage the people to join the pension scheme,” Mr Jaitley said in a statement to parliament today.
The climbdown underscores the challenges for vital but politically-sensitive economic reforms in Asia’s third-largest economy. Protests by farmers last year forced the PM to abandon a bill to simplify rules for industrial land sales.India’s urban middle class, which mostly supported the BJP in the 2014 general election, has shown resentment over a rise in its tax burden.
Apart from imposing a levy to fund the Swacch Bharat or Clean India initiative, the government has taxed away half the windfall of a slump in oil prices. This year’s Budget hiked taxes on cars and aviation fuel, and introduced a new tax surcharge to pay for measures to aid the rural poor.