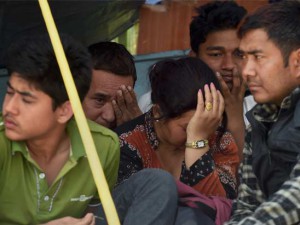 KATHMANDU: Tremors shook parts of West Bengal and Bihar on Monday evening, three days after a severe earthquake caused devastation in neighbouring Nepal, killing more than 4,000 people and sending thousands of residents rushing out of their homes fearing for their safety.
The US Geological Survey said Monday’s earthquake was centred in West Bengal and had a magnitude of 5.1. Saturday’s 7.9 quake in Nepal had been followed by 55 aftershocks by Monday morning, India’s Met department said.
“It was just now, everything was shaking. People began to come out of their homes,” a Reuters reporter in Patna said after the latest tremor.In Kathmandu, as people prepared to spend a third night in the open, anger began to emerge at the slow pace of recovery, with government officials in disarray and aid workers struggling to move supplies out of the overrun Tribhuvan airport.
Key highways have been blocked by landslides, and many villages and communities are without water and electricity, surviving on salvaged food and with no outside help.
While aid has begun arriving in the capital, including consignments of food, medical supplies, tents and sniffer dogs, the authorities are struggling to get relief out to devastated areas, overwhelmed by bad phone lines, poor roads, a lack of equipment and strong, repeated aftershocks.
Sarga Dhaoubadel, a student living outside Kathmandu, said her family was sheltering in a playground, under a plastic sheet. There were some reports of isolated looting in her area. “No one from the government has come to offer us even a glass of water,” Mr Dhaoubadel said. “Nobody has come to even check our health. We are totally on our own here.
A senior Nepali home ministry official told Reuters the government faces a shortage of basic supplies, such as food, and specialised rescue equipment, and complained that India so far has been the only country to send helicopters. “Contact is yet to be established with the worst affected areas,” the official said.
As the focus begins to shift from the dead to the survivors, international aid agencies and officials warned the spread of disease is now the biggest concern. The monsoon season, which brings heavy rains, begins in Nepal at the end of May.
The United Nations Children’s Fund estimates nearly one million children in Nepal have been severely affected by the quake, and it has warned of waterborne and infectious diseases.
Zubin Zaman, a humanitarian response manager with Oxfam, said hundreds of thousands of people are living in the open without access to food or toilets. More people could die from disease than were killed when buildings collapsed, he said.
“Things are not getting any better, the tremors continue, and the rains over the last two days have compounded the situation,” Mr Zaman said.Shivaram Laghe, who lives in the ancient city of Bhaktapur, east of Kathmandu, said people living in relief camps are growing restless and unhappy with the distribution of supplies.

“Everything’s being distributed in a haphazard manner,” Mr Laghe said. “The most urgent supplies come in small batches and then everyone starts grabbing it, in the absence of coordination.”
As hundreds gathered at Nepal’s international airport trying to secure tickets out, aid workers said they struggled to get planes to land and supplies off the runway because many workers have gone home to deal with relatives, and damaged homes. “It’s a completely chaotic situation,” said Devendra Singh Tak, who works for Save the Children. “The airport is not equipped to manage this kind of traffic, particularly when there’s no staff.”
Anshu Gupta from Indian charity Goonj, which distributes clothes, said his organisation had two trucks waiting to cross into Nepal, but had yet to receive permission. “Any government, any system – no one on this earth is prepared for this kind of disaster,” Mr Gupta said