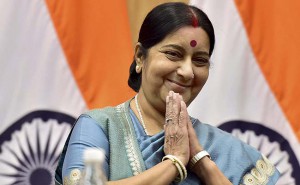 NEW DELHI: In a rare moment of bonhomie between the treasury and opposition benches in parliament, union External Affairs Minister Sushma Swaraj today earned praise from the opposition members in the Lok Sabha.
“I want to thank Sushma Swaraj ji. She is doing an exceptionally good job to save our people abroad,” Aam Aadmi Party’s Bhagwant Maan said in the Lok Sabha during question hour.”Recently, 13 people of my constituency were made slaves in Saudi Arabia. I went to meet external affairs ministry officials who acted immediately. As a result, all these people and eight others were saved and finally returned safely,” Mr Maan said.
Another AAP parliamentarian Dharamveer Gandhi also hailed the minister.”I will not ask any question. I have stood up only to thank the minister. We always get her help whenever needed. She has done a lot for the people of Punjab,” Mr Gandhi said.
Biju Janata Dal leader Baijayant Panda also praised Ms Swaraj, saying, “As a minister, her response has been outstanding.”Rashtriya Janata Dal member Rajesh Ranjan alias Pappu Yadav hailed the external affairs minister for her reply in Hindi even though the questions were put in English.
“I will thank Sushma ji for speaking in Hindi. Despite questions being asked in English, she has replied in Hindi, which is good. There are some members in the house who despite knowing Hindi very well, respond only in English,” he said.
At this point, Lok Sabha Speaker Sumitra Mahajan wondered aloud: “There is no question but thanks only!”On her part, the minister thanked all the members for their encouragement.”I thank all those who thanked me,” she said with folded hands.