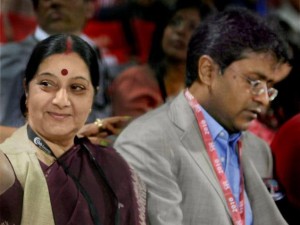 NEW DELHI: In a snowballing controversy over Foreign Minister Sushma Swaraj helping controversial former Indian Premier League boss Lalit Modi gain emergency travel papers in Britain, the opposition has targeted Prime Minister Narendra Modi.
The Congress and the Left have demanded PM Modi’s statement on the role of Sushma Swaraj, one of the seniormost ministers in his government, in helping Lalit Modi secure British travel documents last year in July.
Sushma Swaraj, who met PM Modi over the row on Sunday, says she backed Lalit Modi’s request on “humanitarian grounds” so that he could be with his wife who needed surgery for cancer in Portugal. 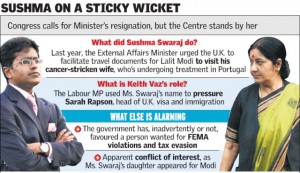 “Taking a humanitarian view, I conveyed to the British High Commissioner that the British Government should examine the request of Lalit Modi as per British rules… If the British Government chooses to give travel documents… that would not spoil our bilateral relations,” Ms Swaraj said. The previous UPA government had reportedly told the British government that if Lalit Modi was granted the papers, it would spoil ties.
Lalit Modi was removed as chairman of the multi-billion dollar Indian Premier League (IPL) in 2010 over allegations of corruption for which he is being investigated by the Enforcement Directorate. Indian authorities revoked his passport but it was restored in August last year by the Delhi High Court.
According to the British media, Indian-origin British MP Keith Vaz used Sushma Swaraj’s name to put pressure on UK immigration officials to grant travel papers to Lalit Modi.
Sushma Swaraj said Lalit Modi told her in July last that he had to sign the consent papers for his wife’s operation on August 4 in Portugal. “What benefit did I pass on to Lalit Modi… He was in London. After his wife’s surgery, he came back to London. What is it that I changed?” she tweeted.
The opposition has alleged conflict of interest. Sushma Swaraj’s husband Swaraj Kaushal was Lalit Modi’s lawyer for 22 years and her daughter Bansuri has been his lawyer for seven years.
“The PM and the BJP have been talking about accountability but when it comes to brass tacks, the prime minister is absolutely quiet. It is perfectly justifiable (if there is a) humanitarian ground. But if a person faces criminal charges, can relief be considered on humanitarian grounds?” questioned CPI-M general secretary Sitaram Yechury.
The Congress has said Ms Swaraj should resign on moral grounds. It has pointed out that laws in Portugal do not require written consent. “The nation is being deceived, it appears,” said the party’s Shakeel Ahmed.
The ruling BJP has rallied around the foreign minister. BJP President Amit Shah said, “There were no moral grounds involved. The help was based on humanitarian grounds.” Home Minister Rajnath Singh said, “What Sushma ji has done, it is right… I want to clarify that the government stands with her.”