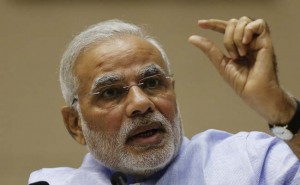 NEW DELHI: When the government of Prime Minister Narendra Modi muscled through an executive order in December simplifying the government and private companies’ ability to obtain land for what it deems important development projects, it sent a message to voters – and Modi’s political adversaries – about his decisive style of leadership and his commitment to industry.
“Modi govt to give industry its promised land,” read one newspaper headline.But as Modi attempts to translate the land order to permanent law, he has met a wall of protest from a united opposition, threatening a part of his economic reform agenda meant to overcome long-standing barriers to growth in India.
On Friday, the Parliament broke for a month-long recess without passing the bill. Venkaiah Naidu, the Minister of Parliamentary Affairs, indicated that the government would push for the bill in the second half of the session, but Finance Minister Arun Jaitley did not rule out the possibility of canceling the rest of the Parliamentary session and reissuing the executive order, which is set to expire by April 5.
Whether the bill is passed in the coming weeks or months will be an early indication of Modi’s ability to deliver on promises made to ease business restrictions over the long term and spur development of everything from new cities and factories to more roads, to speed commerce.
On Sunday, during a recurrent radio broadcast from the Prime Minister, “Mann Ki Baat,” Hindi for “A Talk from the Heart,” Modi appealed to farmers to support land acquisition. He denied that the bill made it easier for corporations to obtain land without consent for private projects, a common concern.
Last week, more than 100 lawmakers led by the aging matriarch of the opposition Indian National Congress, Sonia Gandhi, marched on the presidential palace to protest the bill. The party says it will weaken protections for farmers who earn a living from the coveted land.
“The government will very quickly understand that it’s one thing to win landslide elections and another thing to run a government,” Renuka Chowdhury, a Congress parliamentarian, told the television channel Times Now.
For certain development projects, the land bill would do away with two central provisions of a law, passed by a Congress-led government in 2013, that required projects carried out by private companies to have consent from at least 70 percent of farmers in an area before their land could be bought for development. It also does away with the requirement for a detailed survey to determine all the people affected by the loss of land, including sharecroppers.
The Modi-led government has said those demands were chasing away investors needed to fuel India’s growth.
The conflict over the proposed changes has led to a showdown in good part because many farmers do not trust the government and are afraid that they will be forced to part with their land for too little money.
The dispute also has a political dimension, analysts say, as the opposition Congress party struggles to retain relevance after a humiliating loss of power last year to Modi’s Bharatiya Janata Party.

“What I see is an opportunity by the opposition to bring the BJP to its knees,” said Sanjoy Chakravorty, a professor of geography and urban studies at Temple University. “You can never go wrong by claiming to be pro-farmer in India.”
The bill loosens restrictions on buying land for five types of developments that Modi says he believes are central to India’s economic growth, including the building of rural infrastructure and industrial “corridors” that would encourage more trade between major cities.
In one important corridor, between Delhi and Mumbai, a significant part of the project – the proposed construction of a warehousing area – has been abandoned because farmers have been unwilling to sell, according to Amitabh Kant, the project’s chairman.
The new bill passed in the lower house of Parliament, where Modi’s party enjoys a majority, on March 10, but faces serious hurdles in the upper house, where the BJP is in the minority.
Even critics of the bill say that the reforms, if properly done, would dramatically benefit farmers, most of whom make a substandard living off the land.
“The farmers are going to make money from acquisition which is 25 times or maybe 100 times more than they’re going to get from farming in perpetuity,” said Chakravorty, the Temple professor, who wrote the book “The Price of Land: Acquisition, Conflict, Consequence.”
There is some indication that more farmers would sell under the right circumstances. A report published last year by an arm of a Delhi-based think tank, the Center for the Study of Developing Societies, found that 61 percent of farmers would leave farming if they were able to get a job in a city.
Ankit Rana, 20, whose father owns about 5 acres outside of Delhi, is one of those who agrees that farmers would be better off selling, but only for a price that would allow them to live well.
Years ago, a power plant was proposed in his village, but farmers fought the acquisition of the land because they felt they were offered too little in exchange. Although he agreed with that decision, he said the plant would have benefited the community, helping it urbanize.
“If the plant is set up here, this too will be converted into a city,” he said. “Of course we want that.”