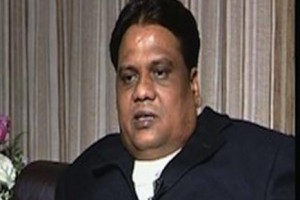 NEW DELHI: A team of officials from the CBI, and Mumbai and Delhi polices have left for Indonesia to seek deportation of underworld don Chhota Rajan, who was given consular access on Sunday.
According to a CBI official, a joint team of officers from CBI, Mumbai Police and Delhi Police left on Saturday night for Indonesia. “They would be formally seeking deportation of Rajan, and would comply with all legal requirements,” he said.

The team departure came two days after India wrote formally to the Indonesian authorities seeking Rajan’s deportation to India to face trial in various criminal cases against him in India.
Meanwhile, first Secretary (consular) at the Indian embassy in Jakarta, Sanjeev Kumar Agrawal, met Rajan for about half an hour at the detention centre in Bali in the first formal contact between an Indian official and the wanted don.
Agency report said that Agrawal, who is based in Indian Embassy in Jakarta, flew on Sunday morning to Bali and drove straight to the police centre where the 55-year-old Rajan is housed. Two days earlier, the Indonesian police had submitted a formal report to the Indian Embassy about the detention of Rajan, while travelling on an Indian passport.
Rajan was arrested on last Sunday by Indonesian police at the Bali airport on an alert issued by the Australian authorities. He had been living in Australia for last few years. Rajan was carrying an Indian passport issued in the name of Mohan Kumar when he was arrested.

The Indian investigators who are in Bali are believed to be carrying detailed documentation on Rajan, including arrest warrants issued by courts for him, chargesheets and FIRs against him in various police stations under various Indian criminal laws.
The documentation is expected to quicken the process of Rajan’s deportation, since there is no extradition treaty between the two countries.Most of the cases against Rajan are registered with Mumbai police. According to conservative estimates, Mumbai has at least 75 cases registered against him while Delhi Police has six cases on him.
Sources said Rajan would be handed over the Mumbai police once he is brought back to India. The don, whose criminal gang has considerably weakened in recent years, faces 20 murder cases, four cases under the Terrorist and Disruptive Activities (Prevention) Act, one under Prevention of Terrorism Act and over 20 cases under the Maharashtra Control of Organised Crime Act.