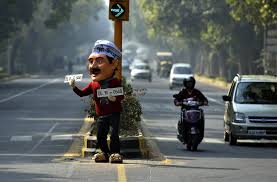 NEW DELHI: Delhi’s new odd-even plan for cars took off today in a drastic step to cut down smog in the world’s most polluted city. Chief Minister Arvind Kejriwal says he is “overwhelmed by the response.”
Today, only odd-numbered cars are allowed on the roads as part of a 15-day plan to allow private vehicles on alternate days.
“I am truly overwhelmed by the response. People have achieved the impossible. I am sure Delhi will show the way,” said Arvind Kejriwal.
Mr Kejriwal said there were very few even-numbered cars on the road today. Shortly after the rule came into force, an even-numbered car was stopped at the major ITO intersection and the driver was fined.
Mr Kejriwal, who has an odd-numbered car, carpooled with two ministers – Gopal Rai, the Transport Minister, and Health Minister Satyendar Jain.
Tourism minister Kapil Mishra has taken a motorbike to work. Environment Minister Imran Hussain, who has an even-numbered car, says he will use an autorickshaw.
Many offices and residents’ associations have arranged car-pools. The union home ministry has also organised car-pooling for its officers.Offenders are being fined Rs. 2,000 by traffic policemen and officials. Exceptions have been made for medical emergencies, women, VIPs, CNG cars and two-wheelers.
Delhi Police Chief BS Bassi said: “I request people to cooperate with us for the next 15 days.”Volunteers are out on the roads carrying placards explaining the rules. They cannot stop cars, but have been asked to hand out flowers to offenders.
To cope with the extra pressure on the public transport network, the government has hired around 3,000 private buses. The government has said that special buses are ferrying people between Delhi, Gurgaon and Noida.