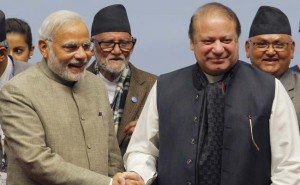 NEW YORK: The world’s attention has rightly been riveted on negotiations aimed at curbing Iran’s nuclear program. If and when that deal is made final, America and the other major powers that worked on it – China, Russia, Britain, France and Germany – should turn their attention to South Asia, a troubled region with growing nuclear risks of its own.
Pakistan, with the world’s fastest-growing nuclear arsenal, is unquestionably the biggest concern, one reinforced by several recent developments. Last week, Pakistan’s prime minister, Nawaz Sharif, announced that he had approved a new deal to purchase eight diesel-electric submarines from China, which could be equipped with nuclear missiles, for an estimated $5 billion. Last month, Pakistan test-fired a ballistic missile that appears capable of carrying a nuclear warhead to any part of India. And a senior adviser, Khalid Ahmed Kidwai, reaffirmed Pakistan’s determination to continue developing short-range tactical nuclear weapons whose only purpose is use on the battlefield in a war against India.

These investments reflect the Pakistani army’s continuing obsession with India as the enemy, a rationale that allows the generals to maintain maximum power over the government and demand maximum national resources.
Pakistan now has an arsenal of as many as 120 nuclear weapons and is expected to triple that in a decade. An increase of that size makes no sense, especially since India’s nuclear arsenal, estimated at about 110 weapons, is growing more slowly.
The two countries have a troubled history, having fought four wars since independence in 1947, and deep animosities persist. Prime Minister Narendra Modi of India has made it clear that Pakistan can expect retaliation if Islamic militants carry out a terrorist attack in India, as happened with the 2008 bombing in Mumbai. But the latest major conflict was in 1999, and since then India, a vibrant democracy, has focused on becoming a regional economic and political power.
At the same time, Pakistan has sunk deeper into chaos, threatened by economic collapse, the weakening of political institutions and, most of all, a Taliban insurgency that aims to bring down the state. Advanced military equipment – new submarines, the medium-range Shaheen-III missile with a reported range of up to 1,700 miles, short-range tactical nuclear weapons – are of little use in defending against such threats. The billions of dollars wasted on these systems would be better spent investing in health, education and jobs for Pakistan’s people.
Even more troubling, the Pakistani army has become increasingly dependent on the nuclear arsenal because Pakistan cannot match the size and sophistication of India’s conventional forces. Pakistan has left open the possibility that it could be the first to use nuclear weapons in a confrontation, even one that began with conventional arms. Adding short-range tactical nuclear weapons that can hit their targets quickly compounds the danger.
Pakistan is hardly alone in its potential to cause regional instability. China, which considers Pakistan a close ally and India a potential threat, is continuing to build up its nuclear arsenal, now estimated at 250 weapons, while all three countries are moving ahead with plans to deploy nuclear weapons at sea in the Indian Ocean.
This is not a situation that can be ignored by the major powers, however preoccupied they may be by the long negotiations with Iran.