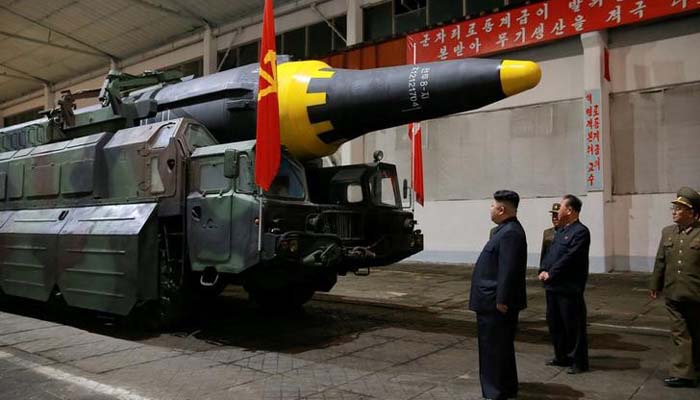 SEOUL/ TOKYO: North Korea fired a ballistic missile over Japan and into the Pacific Friday, responding to new UN sanctions with what appeared to be its furthest-ever missile flight amid high tensions over its weapons programmes. The missile flew over Japan`s northern Hokkaido far out into the Pacific Ocean, South Korean and Japanese officials said.
The launch, from near Pyongyang, came after the United Nations Security Council imposed an eighth set of measures on the isolated country over its ballistic missile and atomic weapons programmes.
That followed its sixth nuclear test — by far its largest yet — earlier this month, which Pyongyang said was a hydrogen bomb small enough to fit onto a missile.
The missile flew over Japan, landing in the Pacific about 2,000 km (1,240 miles) east of Hokkaido, Japan Chief Cabinet Secretary Yoshihide Suga told reporters in a hastily organised media conference, reported Reuters.”These repeated provocations on the part of North Korea are unpermissible and we protest in the strongest words,” Suga said.
In New York, the Security Council called an emergency meeting for later Friday.The US Pacific Command confirmed Friday’s rocket was an intermediate range ballistic missile (IRBM) and said it did not pose a threat to North America, or to the US Pacific territory of Guam, which Pyongyang has threatened to bracket with “enveloping fire”.
Seoul’s defence ministry, however, said the missile reached an altitude of about 770 km (480 miles) and flew for about 19 minutes over a distance of about 3,700 km (2,300 miles), which is far enough to reach Guam.It was “the furthest overground any of their ballistic missiles has ever travelled”, Joseph Dempsey of the International Institute for Strategic Studies said on Twitter.

Japanese prime minister Shinzo Abe said that Japan would “never tolerate” what he called North Korea`s “dangerous provocative action that threatens world peace” following a missile launch over his country “We can never tolerate that North Korea trampled on the international community`s strong, united resolve toward peace that has been shown in UN resolutions and went ahead again with this outrageous act,” Abe told reporters.
Abe, who was in India on Thursday, launch the bullet train project with Prime Minister Narendra Modi in Ahmedabad. On Thursday, the UNSC imposed the eighth set of sanctions on North Korea over its ballistic missile and atomic weapons programs. US President Donald Trump has been briefed on North Korea’s recent missile attack.
“Initial assessment indicates the launch of an intermediate range ballistic missile (IRBM),” the US Pacific Command said in a statement, reported AFP. “The North American Aerospace Defense Command (NORAD) determined this ballistic missile did not pose a threat to North America,” it said. “US Pacific Command determined this ballistic missile did not pose a threat to Guam.”

President Trump on Thursday said he would visit Japan, South Korea, China and Vietman in November.The unidentified missile, fired from near Pyongyang, reached an altitude of about 770 km (480 miles) and flew 3,700 km (2,300 miles), according to South Korea`s military – far enough to reach the US Pacific territory of Guam.
Meanwhile, South Korea said it had fired a missile test into the sea to coincide with North Korea`s launch. The presidential Blue House has called an urgent National Security Council meeting. Japan also convened a National Security Council meeting.( Agency Reports)