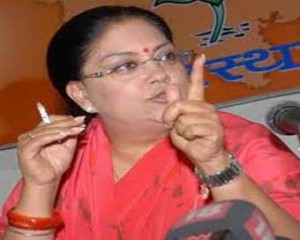 NEW DELHI: On Thursday evening, Finance Minister Arun Jaitley returned from the US and defined the ruling BJP’s stance on the Vasundhara Raje controversy. “There is nobody who is tainted please,” Mr Jaitley said at the Delhi airport.
The party, sources have told , will back the Rajasthan Chief Minister, who is caught in a political storm over supporting disgraced cricket tycoon Lalit Modi’s immigration appeal to UK in 2011. The sources pointed out that there is no charge of financial corruption against Ms Raje.
Another senior union minister Venkaiah Naidu said, “As far as party is concerned, everything is happening positively.”In defence of Ms Raje, a powerful regional leader, top government sources denied the Congress charge that she helped a “fugitive” in Lalit Modi.
A senior leader argued that Mr Modi faces charges under the Foreign Exchange Maintenance Act or FEMA, which does not have provisions for arrest and so he cannot be called a fugitive.
Eager to distance the party and government from Lalit Modi, the leader said the BJP-led NDA government had “inherited this fault” from the UPA regime and is keen to amend it soon.
The government, he said, is likely to explore the legal possibility of pursuing charges against Lalit Modi under the Money Laundering Act, which has a provision for arrest. “That is how, with the help of a court order, he can be brought back to India to face the legal system,” the BJP leader said.
Another party leader pointed out that the strongest indictment against Lalit Modi came from a committee of India’s cricket board headed by the BJP’s Arun Jaitley
Earlier on Thursday, a press release from Ms Raje’s office said she had not been asked by the party to resign. The statement complained about “unsubstantiated media reports” and also denied that she was likely to travel to Delhi soon to meet the BJP’s top bosses.