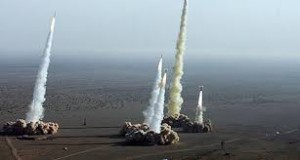 TEHRAN: Iran’s foreign ministry insisted today that the missile tests carried out by the country’s Revolutionary Guard this week do not violate Tehran’s nuclear deal with world powers or a UN Security Council resolution.
The ministry spokesman Hossein Jaberi Ansari said, the missiles were conventional defensive instruments and they were merely for legitimate defense.
Iran’s Revolutionary Guard test-launched two ballistic missiles yesterday. It was the latest in a series of recent tests, aimed at demonstrating Iran’s intentions to push ahead with its ballistic program after scaling backing its nuclear program under the deal reached last year with the US and other world powers.

Ansari said that Iran will continue its missile program. However, he added Iran will remain committed to its international obligations.