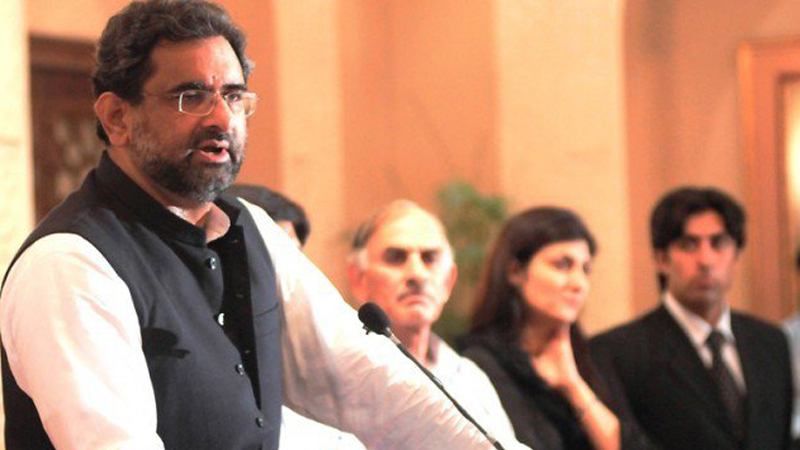 WASHINGTON : There is no role for India in Afghanistan and Islamabad’s ties with New Delhi could improve only if the “core issue” of Kashmir is resolved first, Pakistan Prime Minister Shahid Khaqan Abbasi has said. Mr. Abbasi’s remarks during an interaction at the Council on Foreign Relations (CFR) put Pakistan at odds with the new U.S strategy for South Asia announced last month by United States President Donald Trump.
Mr. Trump’s policy appears to overlook Pakistan’s argument that the conflicts in Afghanistan and Kashmir are linked. In his speech on the new strategy that was welcomed by India, he had come down on Pakistan for providing safe havens to terrorists and asked India to play a bigger role in Afghanistan. Mr. Abbasi said charges of Pakistan sheltering terrorists were untrue and the only cross-border movement of terrorists in the region was from Afghanistan to Pakistan, and not the other way around.

“Zero,” Mr. Abbasi, said when asked what role did he foresee for India in Afghanistan. “India — we don’t foresee any political or military role for India in Afghanistan. I think it will just complicate the situation and it will not resolve anything. So if they want to do economic assistance, that’s their prerogative, but there’s no —we don’t accept or see any role politically or militarily for India in Afghanistan,” the Pakistani PM said.
The Pakistani leader accused India of aggression along the Line of Control in Jammu and Kashmir and the current turmoil in the state. He said India was trying to “draw attention away from the genuine struggle of the Kashmiri people, who have today risen against the Indian occupation there,” urging the “world community to take notice of those atrocities.”

We have developed short-range nuclear weapons as a counter to the Cold Start doctrine that India has developed,” he said, adding that those are in the same command-and-control authority that controls the other strategic weapons. “So there is no question of it being not in secure hands. Time has proved, and it’s a very secure environment in which our strategic weapons are controlled and held,” Mr. Abbasi said.
N-deal from US, a la India
Mr. Abbasi said Pakistan has been eager to get a nuclear deal from the U.S. similar to what India was given in 2006. “…that is something that we always raise at various forums, that there should be equal treatment on such issues. And that’s what we intend to pursue,” he said.

Talking of the current stalemate in India-Pakistan relations, the Pakistani PM said, “…I think we need to engage on core issues. Those have to be resolved first, and Kashmir is the basic core issue there,” adding that “in the recent past the aggression from India has continued unabated, and that is not acceptable.”“And we want normal relations with India, but on the basis of trust and respect,” he said, when asked about what did he foresee on ties with India.

In response to questions on the deteriorating relations between the U.S and Pakistan and the Donald Trump administration’s decision to suspend the strategic dialogue between the two countries, Mr. Abbasi said: “We’re engaged at various levels. And our objective is the same, to find peace in Afghanistan, to develop the relationship further. And relationships have their ups and downs. … And I think the engagement will continue. And I think any misconceptions will go away. We remain a partner in the war against terror,” he said.
Mr. Abbasi was defiant on the issue of American drone attacks on Pakistani soil. “No, no. We cannot condone that. We cannot allow that. I think the sovereignty of our territory has to be respected,” he said in response to a question.The Hidu.