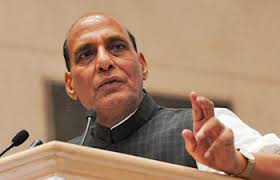 NEW DELHI : The Home Ministry on Monday dismissed reports that Rajnath Singh has plans to meet his Pakistani counterpart on the sidelines of the SAARC conference in Nepal scheduled to be held later this month.The Home Minister’s office said in a tweet that Singh was of the firm opinion that terror and talks cannot go together.
“Unless Pakistan stops terrorism and violence no dialogue is possible,” the Home Minister’s office said. The Home Minister will visit Nepal on September 18 and 19 to attend the SAARC Home Ministers’ conference.The statement from the Home Ministry came a day after Singh slammed Pakistan for repeatedly violating ceasefire along the Indo-Pak border and straining the bilateral ties.
Addressing a rally in Haryana’s Palval on Sunday, Union Home Minister asserted that India wants good and peaceful relations with its neighbour but if the violations continued then the Indian Army will strongly retaliate.”Wanting peaceful relations with all countries should not be treated as India’s weakness,” Rajnath said and added that security forces have been directed to give a “befitting” reply to ceasefire violations by Pakistan.
Referring to recent incidents of firing from across the Line of Control, the Home Minister said he has directed BSF “not to keep showing white flag” if the violations by Pakistan continue. “I have asked the BSF DG to tell his force to give a befitting reply to firing from Pakistan,” Singh said, addressing BJP’s ‘Vijay Sankalp Yatra’ at Hathin in Haryana’s Palwal district.
The Union Minister told that he was informed by the BSF DG that “we have on 15 occasions shown white flags, but Pakistan is repeatedly indulging in firing”.
India is no longer considered a weak state the perception that had been built up during the rule of the UPA government has changed after the formation of the Modi government. “We are not weak, we are fully capable of giving a befitting reply to Pakistan if they continue to violate ceasefire,” he said.
Looking at the crowd Rajnath said seeing the number of people that have gathered “I am confident that people of the state will vote for BJP.” Rajnath said BJP wants to assure people of nation that politics will not be done of caste and religion, but justice and humanity.