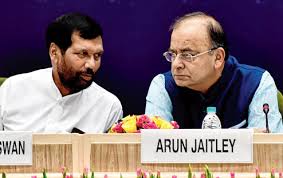 NEW DELHI :  Union Finance Minister Arun Jaitley sought to play down fears of a drought saying it was premature to panic, but private forecaster Skymet said chances of a failed monsoon had risen to 60% from 25%. Meanwhile, the government increased the pressure on traders and declared that offences such as hoarding would be made non-bailable.
Monsoon rainfall has been 43% below normal so far, among the worst in a century, but the weather office says July and August, which get much more rainfall would be better. Jaitley said it was too early to panic, and the country had enough food stocks.
“Monsoon has just started; it is a late start and it is too early to create any panic…We have sufficient foodgrain stock…to face any kind of situation. Depending on where the shortfall or deficient areas are….if such a situation arises, we are equipped to deal with it,” the minister told reporters after a meeting with state food ministers. Jaitley said the feedback from state food ministers endorsed his view that there was no need to panic.
He said there were no shortages after a record output of onions and potatoes, and comfortable food stocks. “The test of good governance is how to de-hoard the stocks kept by intermediaries into the market. This is the biggest challenge … Therefore it is not an issue of scarcity but an issue of supply side.
These commodities are available in sufficient amount but the normal supply is disrupted by hoarders anticipating higher prices. Veggies turn costlier on fears of poor rain Prices of vegetables have risen on fears of weak rainfall. Skymet said rainfall in July will be patchy. “The regional distribution is even more alarming, with 80% chances of drought in Northwest India, 75% in Central India and 50% over South India,” said Jatin Singh, CEO, Skymet. Food, Consumer Affairs and Public Distribution Minister Ram Vilas Paswan said prices of perishable commodities increase between July and November, which also sees a demand surge during festivals.
He said it is important to prevent hoarding and black-marketing as well as to strengthen the supply and distribution of essential commodities during this period. “We have to give more teeth to the Essential Commodities Act to tackle the challenge of black-marketing and hoarding,” Paswan said. The conference of food ministers also noted the role of middlemen in the market. “The intermediaries in the market — the mandi merchants, wholesale traders and APMC (Agricultural Produce Marketing Committee) yards — play a disproportionately important role in controlling the availability of commodities and during the ensuing six months the risks, as in the past, of hoarding, cartelisation and artificial storages are likely,” a government statement said.
The ministry noted that onion prices remain vulnerable to manipulation. “Onion will constitute a major challenge since five states — Maharashtra (28%), Madhya Pradesh (16%), Karnataka (14%), Andhra Pradesh (9%), Bihar (7%) — account for 75% of the total production. The onion wholesale market is also controlled by a cartel of about 12-15 wholesalers across the country. The free inter-state movement, de-hoarding operations and decentralized stocking of onion to meet the dispersed demand across the country. The free inter-state movement, de-hoarding operations and decentralised stocking of onion to meet the dispersed demand across the country will be ensured. There is also need to maintain central stocks,” it said in the statement after the conference of food ministers.