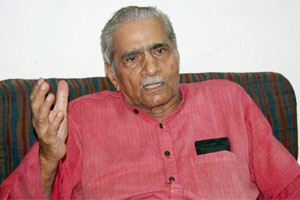 NEW DELHI : The Aam Aadmi Party confronted a new instalment of its intense internal battle today after one of its founder members, Shanti Bhushan, went public with his criticism of party chief Arvind Kejriwal.
Mr Bhushan told a TV channel on Wednesday, “Arvind (Kejriwal) is a great leader and a great campaigner, but in my opinion he lacks organisational ability. He does not have the kind of competence which can spread the message of the party all over India, which can quickly create elected structures of the party which nobody will be able to blame.”
In a detailed critique, he also criticized Mr Kejriwal for abruptly resigning as Delhi chief minister after 49 days without consulting anyone, calling it “a sign of political immaturity”. AAP rebutted that  Mr Bhushan was “apparently unhappy” at the party’s decision to not contest the Haryana polls.
“Mr Bhushan has access to everyone in the party and his colleagues expect him to raise any issue which he considers important, with them, as a senior. It is unfortunate that he has aired his views publicly,” the party said in a statement.
The 88-year-old former law minister remained silent today, while his son Prashant Bhushan, a close aide of Mr Kejriwal, distanced himself from the comments.”This is his personal view. It would have been better if he had discussed it with party members,” Mr Bhushan said, siding with the party.
Mr Kejriwal has been facing increasingly sharp and unsparing attacks on his leadership since the party’s abysmal performance in the national election undid its spectacular debut in the Delhi polls in December.
AAP contested over 300 seats but won just four seats in Punjab. Many in the party believe Mr Kejriwal’s high profile contest against Narendra Modi in Varanasi compromised AAP’s national poll campaign.Soon after the verdict, Shazia Ilmi, a prominent AAP leader, quit citing lack of inner democracy.
In June, Yogendra Yadav, another founder member, wrote in an email to AAP members: “Arvind is turning into a personality cult that can damage an organisation and the leader himself.” The party later insisted that it was united.