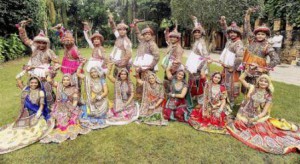 BHOPAL: A lawmaker of the ruling BJP in Madhya Pradesh says she wants Muslims barred from the “Garba” or a Gujarati dance festival to be held in several northern states in October. Usha Thakur, a legislator from Indore and the BJP’s state vice president, is preparing to write to Garba organisers in her constituency, asking them to stop Muslim men from entering the dance venues and seducing women.
The decision, she claims, is based on a meeting of “intellectuals” – including doctors, engineers and a senior police officer – during the festival season last year. “We have got data that during the Garba, on an average, four lakh girls convert to Islam every year. So we have started this awareness drive. It has been seen that people who have no faith or devotion to the festival put tilak and wear sacred thread and practice Garba and during that time woo our girls,” Ms Thakur told Reporters.
She says to stop this alleged “Love Jihad”, festival organisers must check IDs at the gates. The BJP has distanced itself from Ms Thakur’s controversial move, which has been condemned by the opposition Congress. State home minister Babulal Gaur refused to comment. “No, I will not react. Usha Thakur will know about this, not me,” Mr Gaur told NDTV. Congress leader Satyadev Katere said, “The idea is absurd. You cannot force things on society like this
.” Ahead of by-polls on Saturday in key states including Uttar Pradesh and Gujarat, pro-Hindu groups linked to the BJP’s ideological mentor Rashtriya Swayamsevak Sangh have stepped up their campaign against “Love Jihad” – a term for what they consider an Islamist strategy to convert Hindu women. The BJP avoided the term “Love Jihad” last month when it adopted the subject of forced conversions as a campaign issue for the by-elections. But some of the party’s leaders and its affiliates have been less circumspect.