PATNA: Nitish Kumar, Chief Minister of Bihar, voted in Bakhtiyarpur for the Patna Sahib seat some time before noon on Thursday and left without speaking to waiting journalists some of whom had a disagreement with his securitymen. It is an important day for Mr Kumar and for his former partner, the BJP. Patna Sahib is among seven of Bihar’s 40 constituencies that are voting today and Mr Kumar’s Janata Dal (United) holds 20 of those seats. Mr Kumar had won these seats in alliance with the BJP in 2009. This time they are bitter rivals in a face-off that is being pegged as a Narendra Modi vs Nitish Kumar battle in Bihar. 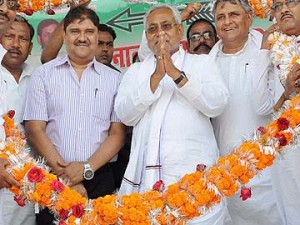 Mr Kumar split from the BJP last year citing Mr Modi’s ascent in his party, which soon named him its prime ministerial candidate. Surveys suggest Mr Kumar might have made a costly error by dumping the BJP, seen as a front runner to win the national elections.For the BJP, testing its fortunes in the state after many years of playing junior partner to the JD(U), Bihar is crucial. This is one of the states, along with Uttar Pradesh and Maharashtra, from where the party hopes to pick a rich haul of seats in its bid for the 272 majority mark. The three big states together send 168 MPs to the Lok Sabha.
Mr Kumar’s Janata Dal (United) has to also contend with the Congress’ alliance in these elections with a Lalu Prasad’s RJD; they have pitched for the Muslim votes that Mr Kumar has traditionally counted on for support. He faces state elections next year.In Patna Sahib today, the BJP’s Shatrughan Sinha battles mostly his image of a “missing MP”, say political observers. A section of BJP workers have protested against his candidacy and it does not help his cause that the Congress has fielded a popular Bhojpuri actor Kunal Singh and the JD(U) a renowned surgeon Gopal Prasad Sinha against him. The X-factor could be, Parveen Amanullah of the Aam Aadmi Party, formerly a JD(U) minister. In adjacent Patliputra, Lalu Yadav’s oldest daughter Misa Bharti is fighting her first election. Both the BJP and JD(U) have fielded former aides of her father against Misa.