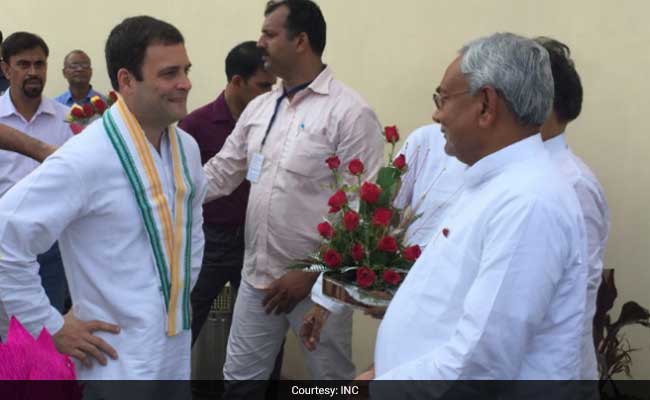 NEW DELHI : Amid tensions in Bihar’s grand alliance, Chief Minister Nitish Kumar on Saturday met  Rahul Gandhi one-on-one for 40 minute to discuss the current political situation in the state. Kumar, who is in Delhi to attend a dinner hosted by PM Narendra Modi for outgoing President Pranab Mukherjee,  According to Party sources Kumar drove to Gandhi’s Tughlaq Lane residence here and discussed about graft charges against his Deputy Tejashwi Yadav.
The conversation between Mr Kumar and Rahul Gandhi comes at a time their coalition in Bihar, the Mahagatbandhan, is in serious trouble amid these corruption charges. Sources close to the Nitish Kumar had told that Mr Kumar, upset with the Congress’ vocal support for Lalu Yadav, had cancelled his earlier visit to Delhi to attend the meeting of 18 opposition parties to select the vice presidential candidate. Kumar on Saturday clarified to Rahul Gandhi that the Congress leadership must stop defending ‘tainted’ Lalu Prasad family, as per sources.

Though the Congress has left it to Mr Kumar to decide on whether his deputy Tejashwi Yadav should quit, the party has come out in Lalu Yadav’s support, backing his claim that he is being subjected to political vendetta. Mr Kumar had sought an explanation from Yadavs earlier this month as the minimum requirement for keeping the alliance alive, though he made it clear that what he prefers that Tejashwi Yadav should quit. The RJD blustered that would not happen, further angering Nitish Kumar.

Talks between Nitish and Tejashwi last week do not seem to have smoothed the political ripples.Kumar’s meeting with Gandhi comes days after Congress President Sonia Gandhi spoke to the Bihar CM and RJD chief in a bid to prevent a collapse of the ruling coalition. While the RJD supremo has rejected demands of resignation of his son, Kumar is learnt to have reservations about Tejashwi’s continuance as it dents his “anti-corruption” image.
Allies Nitish Kumar and the Congress are also trying to bridge the gap that busted out after they decided to back competing candidates for the post of President. Mr Kumar, going against the united opposition’s stand, chose to support the BJP’s choice, Mr Kovind, who was the Governor of Bihar. Mr Kumar had asserted that his support for Mr Kovind was based only on the 71-year-old leader’s credentials and his impeccable neutrality during his tenure as Bihar Governor.
Congress’ Ghulam Nabi Azad attacked the Bihar Chief Minister suggesting that he has flexible principles; Nitish Kumar, who says he is still committed to the opposition unity, retaliated that the opposition is in “a mess” because its anchor, the Congress, is slow-footed.