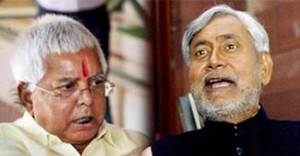 CHAPRA (BIHAR): Nitish Kumar and Lalu Prasad Yadav, who recently joined hands after more than 20 years of political rivalry, today held their second rally in Chhapra, in northeastern Bihar, to campaign for by-polls for 10 Assembly seats scheduled to be held on August 21.
Unlike their first outing together in Hajipur last week where Mr Kumar and Mr Yadav sat together on stage and exchanged a hug, the two leaders sat separately this time and hardly engaged in any conversation. In the end, however, the customary photo-op did happen. But the increase in turnout in Chhapra seemingly pleased the two leaders and they launched an attack on the BJP and its ideological mentor, Rashtriya Swayamsevak Sangh (RSS).
“I want to urge our party workers to work very hard till the date of the election because those who we have allied against are members of a rumour spreading society,” said Mr Kumar, taking a dig at the RSS. Mr Kumar broke his party’s 17-year-old alliance with the BJP last year after Narendra Modi’s elevation in the party. He paid dearly in the national election this year with the BJP sweeping 31 of the state’s 40 Lok Sabha seats and Mr Kumar’s JD(U) winning only two.
Mr Yadav’s RJD too suffered a humiliating defeat at the hands of BJP, but that did not stop the former Bihar chief minister from declaring how he and Mr Kumar together had “stopped Mr Modi”. “In the Lok Sabha polls, if we collate votes that I and Nitish Kumar got, we got more votes than the BJP. It is clear that the BJP was not voted in Bihar. We had stopped Mr Modi,” he said today.
For both these leaders, the task ahead is a tough one. Their parties were decimated by the BJP in the Lok Sabha polls, and now this coming together is an attempt at political relevance in a state where the BJP-led alliance seems all set for more electoral gains after the Lok Sabha victory.