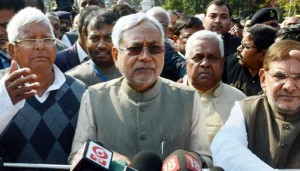 PATNA: Nitish Kumar of the Janata Dal United or JDU took oath on Sunday evening as Chief Minister of Bihar along with 22 ministers. West Bengal minister Mamata Banerjee and Assam chief minister Tarun Gogoi attended the ceremony.
Three to four ministers took oath at a time at the brief ceremony held at the Raj Bhavan in Patna. All ministers sworn in today were part of the government of Jitan Ram Manjhi, who resigned dramatically on Friday after a lengthy tussle with Nitish Kumar over the top post.
Some more ministers from JDU allies, Lalu Yadav’s Rashtriya Janata Dal or RJD and the Congress, are expected to join the Nitish Kumar government later.Mr Kumar has to prove his majority in a floor test in the Bihar Assembly by March 16. He claims he has the support of over 120 legislators, including those of his allies. The halfway mark is at 117 currently.
Mr Kumar’s allies in what they call the “Janata Parivar,” Samajwadi Party chief Mulayam Singh Yadav and Lalu Yadav skipped the oath ceremony because of a family wedding. They sent representatives.These parties already form an opposition pressure group in Parliament, which convenes for the budget session tomorrow. The presence today of Mamata Banerjee – who cheered the efforts of Nitish Kumar to make a comeback as chief minister – is seen as significant.Ms Banerjee has in common with the “Janata Parivar” leaders – all regional powerhouses like her – a rivalry with Prime Minister Narendra Modi’s BJP, the chief challenger in each of their states.
On Saturday, PM Modi attended the lavish pre-wedding “tilak” ceremony of parliamentarian Tej Pratap Yadav, Mulayam Singh’s grand-nephew, who is marrying Lalu Yadav’s daughter, Raj Laxmi. A rare bonhomie was on display.The PM’s visit to Uttar Pradesh and the warm vibes were seen to have political context.

The BJP and its allies are in a minority in the Rajya Sabha and Upper House of Parliament and the PM needs the support of opposition parties to push important legislation in the Budget session.
Hours before he took oath, Mr Kumar said in an Op-ed written exclusively for NDTV.com, “I aspire to build a state where this strength becomes institutionalized. And as I would continue to try forever, I aspire to build a state that confidently carries the narrative of positive future, vibrant culture and resilient harmony. And in doing so, I will readily work with the honourable Prime Minister and the Government of India in the interest of Bihar.”
Bihar is heading for elections later this year, in which, the JDU, along with RJD and the Congress is likely to present a united front against the BJP. Mr Kumar’s bid to come back as a chief minister was made in view of the coming elections.