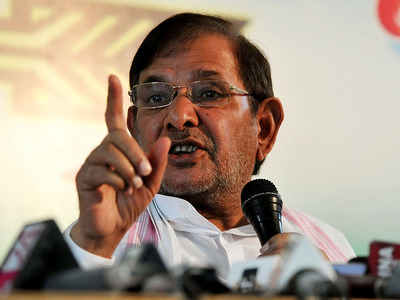 PATNA/ NEW DELHI : The Janata Dal (United) has decided to remove rebel Rajya Sabha MP Sharad Yadav as the leader in the House. The decision comes in the wake of Sharad Yadav revolting against Nitish Kumar after he joined hands with the BJP to form government in Bihar.

Announcing the party decision, Bihar JD(U) president Vashishtha Narayan said, “We met Vice President (Venkaiah Naidu) and gave in writing that we have elected RCP Singh as our leader in the Rajya Sabha.” Narayan termed it as a “necessary” call taken by the party leadership. “(It was a) necessary step because being leader if a person indulges in anti-party activities it has to be condemned unanimously,” Narayan said about Sharad Yadav.
Sharad Yadav is touring parts of Bihar in what he called Jan Samvad Yatra. During his public meetings, Sharad Yadav has criticised Nitish Kumar for “betrayal of mandate” in the state. Sharad Yadav claimed that the people of Bihar voted in the last Assembly election to keep the BJP out of power for five years. By walking out of the grand alliance with the RJD and the Congress, and joining hands with the BJP, Nitish Kumar has acted against the wish of the people, Yadav said.

Earlier on Friday, when Sharad Yadav reached Patna from New Delhi, he was received by the supporters and leaders of the RJD including legislators in Bihar Assembly. Speculation is rife in the political circles of Patna that Sharad Yadav may float his own outfit and enter into alliance with the RJD of Lalu Prasad Yadav and the Congress or he may even join the RJD.

Meanwhile, JD(U) yesterday suspended another rebel Rajya Sabha MP Ali Anwar, who has also criticised Nitish Kumar’s decision to form alliance with the BJP. The action against Ali Anwar was taken after he attended a meeting of Opposition parties called by Congress president Sonia Gandhi in New DelhEarlier, Sharad Yadav was expected to attend the meeting of Opposition leaders as Sonia Gandhi made a fresh bid to bring the anti-BJP parties under one umbrella and put up a formidable challenge to the Narendra Modi-led alliance in the 2019-general elections. The JD(U) had decided to stay away from the Opposition parties’ meet and asked its leaders not to attend the gathering.

Confirming the big political development, Bihar JD(U) president Vashishtha Narayan on Saturd
Justifying party’s decision and  said, the step was necessary because if a person like Sharad Yadav indulges in anti-party activities it has to be condemned unanimously. The Janata Dal-United president Nitish Kumar on July 26 snapped ties with the Grand Alliance of Rashtriya Janata Dal (RJD) and the Congress.
Since then, Yadav has been criticising Chief Minister Nitish Kumar for breaking the Grand Alliance in Bihar and going with the BJP. Yadav, a former JD(U) president, has made it clear that there is virtually no scope for a compromise between him and Kumar, whose move to form a coalition government with the BJP he had earlier described as a “betrayal of the people’s faith”.