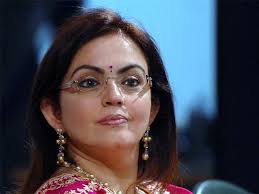 MUMBAI: Nita Ambani, wife of Reliance Industries chairman Mukesh Ambani, is set to join the board of India’s largest private company, it was announced on Friday
The shareholder approval will be sought at the annual general meeting here 18 June. The company’s board has recommended her appointment, replacing Ramnik H. Ambani, the elder brother of the group’s late chairman Dhirubhai Ambani, who retires at the age of 90 years, having served it since inception.