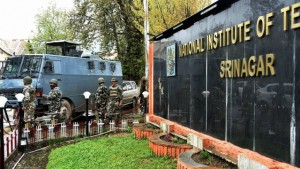 SRINAGAR: Tension in the National Institute of Technology (NIT) has polarised the terror-plagued state of Jammu and Kashmir, with massive protests against the police rocking Jammu on Wednesday. The police had reportedly lathi-charged the non-local students inside the institute’s Srinagar campus on Tuesday.
Meanwhile, a two-member team from the Ministry of Human Resource Development (MHRD) has arrived in Srinagar to take stock of the situation. The team held separate meetings with students and the administration to get a first-hand account of the incident and subsequent simmering tension in the campus. Besides, MHRD minister Smriti Irani spoke to J&K chief minister Mehbooba Mufti about the issue.

The trouble started on Tuesday when nearly 500 students tried to take out a march and exit the campus. They were demanding hoisting of the Tricolour on the campus, permanent security from outsiders and deployment of central forces.
Other demands included equality and transparency during examinations, end of harassment by the faculty and action against some faculty and administration members.

The police resorted to lathi charge to disperse the group and five students were injured during the action, sparking outrage across the nation. Sensing trouble, two CRPF companies were deployed in the campus.
“The situation is calm… better than last evening. The MHRD team has met with a group of students. Class work was on today but attendance was thin. Most students were on the campus,” said professor Fayaz Ahmad Mir, registrar of NIT.

Adding a new dimension to the issue, massive protests were held in Jammu on Wednesday, with Congress’ youth workers trying to storm deputy chief minister Nirmal Singh’s residence.
The police, however, immediately swung into action and detained some of the protesters. In addition, supporters of National Panthers Party (NPP) and other organisations also took to the streets to protest against the alleged harassment and thrashing of students by the police.

“It is a very shameful and shocking act. We will not tolerate such brutal attacks on innocent students. All political parties and social organisations should support the complete Jammu Bandh call,” said Shri Ram Sena president Rajiv Mahajan.

The NIT campus has been simmering since India lost T20 world cup semi-final. Shouting pro-freedom slogans, local students burst crackers and celebrated India’s defeat on March 31. On April 1, non-local students lead a march in the campus and hoisted a Tricolour, shouting pro-India slogans. This led to clashes between local and non-local students, prompting the authorities to close down the campus for a few hours.
“It is not a local versus non-local issue, as is being projected, but just an administrative issue. It is being sorted out. A senior police officer is monitoring the situation and normalcy would be restored on the campus soon,” said J&K minister for education Naeem Akhtar.
Hurriyat hawk Syed Ali Shah Geelani too tried to defuse the tension, saying non-local students were their guests and should be treated well.
“We should not create hurdles for non-local students. They are our guests. But at the same time, they should also understand local sensitivities. Raising Indian flags within or outside the premises will only disturb the academic and professional environment,” he said.
Acting fast to defuse crisis at Srinagar-based NIT campus, the Central government on Wednesday airdashed two teams to assess the situation, a move contrary to dealing with a similar unrest in the Jawaharlal Nehru University (JNU), Hyderabad Central University (HVU) and most recently, in Rajasthan’s Mewar University.
In a similar incident at a private university in Rajasthan, a group of Kashmiri students allegedly raised pro-Pakistan slogans during a match. They were arrested and later released on bail.
They were also suspended from the campus and were asked to report to the university with their guardian. Neither the state nor the Centre came to those students’ rescue.