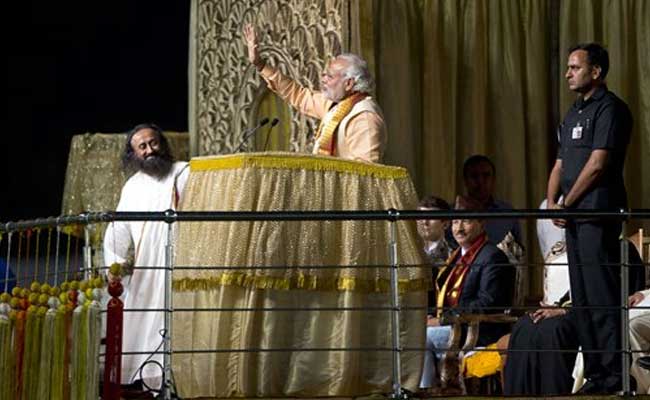 NEW DELHI : The country’s top environment court came down forcefully today on spiritual guru Sri Sri Ravi Shankar, stating,”You have no sense of responsibility. Do you think you have the liberty to say whatever you want?”
Yesterday, Sri Sri said that if any damage has been caused to the environment by the huge three-day cultural festival he held on the banks of the River Yamuna in Delhi last year, it is the government and the court who should take the blame, because they allowed the event.
“If, at all, any fine has to be levied, it should be levied on the Central and state governments and the NGT itself, for giving the permission. If the Yamuna was so fragile and pure, they should have stopped the World Culture Festival,” the 60-year-old, who has lakhs of followers around the world, said in a Facebook post.
A team of experts has testified to the National Green Tribunal that the event, which included a 7-acre stage for musicians and dancers and sprawled across 1,000 acres, had “completely destroyed” the riverbed.They said reversing the damage will take at least 10 years and about 42 crores.
Sri Sri and the Art of Living Foundation, which was founded by him, have denied all allegations of damaging the fragile ecosystem of the Yamuna.The event opened with Prime Minister Narendra Modi on stage next to Sri Sri.
Environmentalists last year asked for the “World Culture Festival” to be disallowed, but the National Green Tribunal said it was too late to call off the event and fined the organization five crores. Sri Sri at the time said he should be given an award for hosting a spectacular event that drew people from across the globe to the banks of one of the world’s most polluted rivers.
Environmentalists last year asked for the “World Culture Festival” to be disallowedThe Art of Living, contesting the charges against it, has said that it is committed to protecting and preserving the environment and has proved this dispensation with various projects around the country.ndtv.