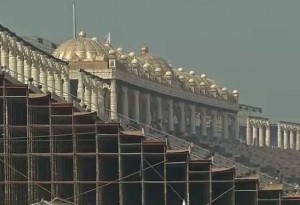 NEW DELHI: The National Green Tribunal, NGT today allowed Sri Sri Ravi Shankar’s ‘World Cultural Festival’ on the banks of the river Yamuna slated to start on Friday with conditions. The green tribunal imposed five crore rupees fine as environment compensation on the festival’s organiser Art of Living Foundation.
The tribunal also imposed a fine of five lakh rupees on DDA and one lakh rupees on Delhi Pollution Control Committee for not discharging statutory functions. A bench headed by NGT Chairperson Justice Swatanter Kumar asked the foundation, headed by Sri Sri Ravi Shankar to deposit five crores rupees as environmental compensation before the event begins on 11th of this month.

The green tribunal clearance came on a day the Delhi High Court described the event as a disaster from the ecological point of view. The tribunal also asked the organisers to give an undertaking by tomorrow that enzymes will not be released into Yamuna river and that no further degradation of environment will happen.
Besides slapping the fines, the tribunal directed the Art of Living to develop the entire area in question into a biodiversity park. The tribunal’s order came on the pleas by NGOs and environmentalists who had sought cancellation of the festival on the ground that it would seriously endanger the fragile ecosystem on the riverbed.

Meanwhile, The The Central Public Works Department (CPWD) has told the National Green Tribunal (NGT) that the 7-acre stage being constructed for the Art of Living’s ‘World Culture Festival’ is unstable, and Prime Minister Narendra Modi, who is expected to inaugurate the event, should have another stage.
The mega festival, to be held from Friday to Sunday, has come under fire for its venue — the floodplains of the Yamuna. The NGT is hearing a petition filed by Manoj Misra, the convenor of the Yamuna Jiye Abhiyaan, seeking the shifting of the venue.
President Pranab Mukherjee was supposed to attend the valedictory session but, earlier this week, the Rashtrapati Bhawan said that he would not be attending the event.
The stage for VVIPs also did not have the mandatory structural certificate, following which the police communicated the matter to the Ministry of Urban Development.
In the Delhi Police letter to the Urban Development Ministry, it was mentioned that the police perceived a “pandemonium” which is bound to result in utter chaos leading to total law and order breakdown, the source said.A united opposition in the Rajya Sabha slammed the Government for allowing the Indian Army to be used for the Art of Living foundation, saying the event was an environmental disaster.
The Government sprung to the defence of the ‘Art of Living’ guru Sri Sri Ravi Shankar, saying his intentions cannot be doubted as he was committed to the protecting environment. The event is being organised with all permissions, it claimed adding that the issue cannot be raised in the House as it was being heard by the NGT.

* NGT pulls up the Ministry of Environment & Forests for not filing affidavit as asked by it regarding environment clearances.* The NGT also asked Delhi Pollution Control Committee if it can allow putting enzymes in river Yamuna without examination.
The NGT asked Centre, Delhi govt and DDA if any environment impact assessment was carried out regarding preparation & consequential effects of AOL event.
Delhi govt informed NGT that CPWD has asked AOL to build a separate stage for PM due to issues over structural safety. NGT asked AOL to submit details of expenses on construction of stage, levelling of flood plains, removal of debris and pontoon bridge.
Delhi govt informed NGT that cops, after inspection, have asked AOL to show structural safety clearance of pontoon bridge & vehicle parking clearance.