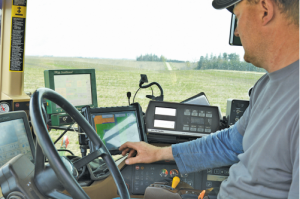 BAXTER — These days, nearly everything has gone high tech, and this includes agriculture.Brock Hansen, who runs a family farming operation with his wife, father and mother that expands into both northern Jasper and southern Marshall counties, does his best to keep up with all the latest and greatest in farming technology.
Last week, as he was planting corn, Hansen, a fifth-generation farmer, explained how he utilizes technology in his operation.
Inside the cabin of his gigantic green John Deere Tractor, he has a collection of monitors — including an iPad he’s uses the FieldView app on. FieldView help makes planting more precise and gives a better indicator of seed population.
“This monitor here is our John Deere monitor, and this is what my guidance is giving me,” Hansen said. “(The iPad) gives me sub-inch accuracy, so I can come back and put the seed in the same trench where I applied my fertilizer to get the best updates and whatnot.”The cabin of the tractor also contains a HAM radio, which seems to be collecting dust as Hansen said he uses an app on his phone that works as a walkie-talkie. Hansen also uses his cell phone’s “Hot Spot”— the ability to create a portable wireless Internet network — capability to upload information directly to The Cloud.
Because of the Cloud, a virtual storage place for data that can be accessed remotely, he said his dad could monitor what he’s doing on his end of the operation without riding along in the tractor if he wanted to. It also collect the data from that day’s work automatically and backs it up.“It’s fairly expensive, I guess when you look at it, but it also helps the support system here,” Hansen said of the tech purchases. “With my planter monitor, it tells me how many seed per acres, but it’s also shutting stuff off when I come into inroads.”
Hansen said it’s kind of a delicate balance farming with so much technology. He said he saves money by not wasting as much seed and being more precise, and he has seen some higher crop yields. But at the same time the upfront costs for the technology taps into those newfound savings.“When I first started farming, basically, we had minimal technology,” Hansen said. “Now, we have probably the most up-to-date technology. It’s just like a huge part of our daily operation. There are days where I wish it wasn’t, but it’s no different than your home computer … it changes so fast you have to stay caught up with it.”
Thanks to his apps, and the ability to be connected to the web, Hansen said he is aware of and can respond to issues either with his crops or equipment immediately.
“I had some planter issues when I was planting the other day, and I can show you a map of stuff that I had issues with,” Hansen said gesturing toward one of his screens. “I can show it to you right now, but there are days when I wish I didn’t have a single bit of it in here.