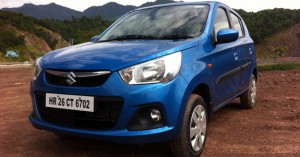 NEW DELHI : After rolling out the much-awaited Ciaz in India, Maruti Suzuki is now all set to bring in the updated Alto K10 in the country. In its first-ever update since its launch, the 1000cc engined K10 will have both, cosmetic as well as mechanical upgrades.
Since the car has already been spotted several times, we know the changes it will come up with. In terms of looks, the car seems to have taken its inspiration from its sibling Alto 800.
The updated model will get a chrome front grille, revised head & tail lights, re-designed bumpers, 13 inch wheels and a few more changes. The cabin too has been updated with a new dashboard, upholstery and control buttons.
The most significant updated, however, is the new Automated Manual Transmission (AMT) that will be offered with select variants.
The similar gearbox is also found in the Celerio. There will also be regular 5-speed manual transmission on offer.
Since the K10 is priced less than the Celerio, so with an AMT on offer, it will become the most affordable semi-automatic car in the country.