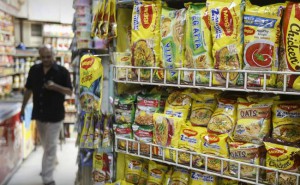 NEW DELHI : As Nestle’s global CEO Paul Bulcke asserted in Delhi that Maggi noodles are “safe to eat”, central food safety regulator Food Safety and Standards Authority of India or FSSAI has ordered the company to recall nine variants of the instant noodles from the market. FSSAI has found nine variants of Maggi noodles “unsafe and hazardous’ for human consumption, news agency Press Trust of India reported.
It said the food regulator has asked Nestle to stop the production, import and sale of these variants with immediate effect. Maggi noodles has been under country-wide scrutiny for high lead content and mono-sodium glutamate or MSG, a taste enhancer. Hours after Nestle pulled Maggi noodles off shelves in India in a midnight announcement, promising to return, Mr Bulcke said at a press conference that the company had tested 1000 batches of the noodles in the last few days and “all results of our tests indicate Maggi noodles are safe for consumption.
” “We have the same quality standards and safety procedures everywhere in the world,” Mr Bulcke said. The company had withdrawn the noodles in India because “we feel the consumer was distressed. We are a company that relies on the trust of the consumer,” Nestle’s top executive said, adding, “We will do whatever it takes to clarify unfounded confusion…We will engage with authorities to clarify the issues.
” Mr Bulcke said the company was “Trying to learn why there’s difference in test results carried out in other laboratories and ours. There is confusion about how you test… if we put them together, we can see why a difference in test results.” Even as he fielded questions from reporters came reports that another state, Madhya Pradesh has banned the sale of Maggi. Five states including Delhi had temporarily stopped the sale of the snack.
Late on Thursday night Nestle said it was taking Maggi noodles off the shelves, reiterating that the snack is safe and promising it will be back soon. Nestle shares traded off the day’s low on Friday, after falling as much as 5 per cent. Over the previous five sessions, Nestle has fallen 15 per cent because of the controversy over Maggi, which accounts for one-fifth of the company’s revenues.