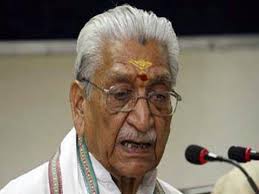 KATHMANDU: Vishwa Hindu Parishad (VHP) leader Ashok Singhal Tuesday said that Nepal will turn into a Hindu state if Narendra Modi becomes India’s prime minister.“He (Modi) is set to come (to) power in India,” Singhal told a gathering of Hindus in the eastern Nepali city of Biratnagar. Once Modi assumes office, it will not take much time to see Nepal as a Hindu state, he said.
Nepal was the world’s only Hindu state until 2008 but was declared secular once the Maoists ousted the monarchy. Since then, a section of Hindu leaders in Nepal and India have campaigned to reinstate Nepal’s identity as a Hindu state.“The day Modi comes in power in India, I declare that Nepal will turn into a Hindu state,” said Singhal.”Under pressure from China, the US, Europe and some Muslim countries, the Hindu identity was finished here,” he said.
Singhal was given a rousing welcome in Biratnagar with thousands of Hindu activists gathering to listen to him.