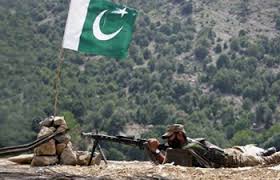 JAMMU:  A 12-year-old girl was killed and five others were injured when Pakistani troops targeted Indian Forward Posts along the Line of Control (LoC) in Poonch district of Jammu and Kashmir today. This was the third ceasefire violation by Pakistan in three days.
“There was a ceasefire violation by Pakistani troops in Poonch sector. Pakistani troops resorted to small arms and mortar shelling along LoC in Sabjian around 1400 hours today,” a senior Army officer said.Indian troops effectively retaliated resulting in exchanges of gun fire which continued till 1530 hours today, he said.
This is the fourth ceasefire violation in past three days. There were three ceasefire violations in Sabjian and Mandi sub-sectors in Poonch and one in Forward Area in Kashmir Valley on October 1.
Pakistani troops resorted to heavy firing by small arms and automatic weapons and shelling of 81 mm mortar bombs in two forward sub-sector of Sabjian and Mandi along LoC in Poonch district on the intervening night of October 1 and 2.
They also targeted civilians living in border hamlets of Gigriyal and Uripura along the LoC, police officials said.
This month’s ceasefire violations came after a gap of one month along the Indo-Pak border in Jammu and Kashmir.Pakistan Rangers had resorted a series of ceasefire violations along the international border in August.
In a bid to defuse border tension triggered by 45 days of firing and shelling by Pakistani troops, the longest since 1971 war, India and Pakistan on August 29 held a crucial Sector Commander (DIG-Brigadier) level flag meeting on Octerio BoP in RS Pura sector to decide to maintain peace and tranquility by silencing guns.Indian troops on Friday retaliated to a ceasefire violation by Pakistan across the Line of Control (LoC) in Saujian area of Jammu and Kashmir’s Poonch sector.
Defence Public Relation Officer (PRO) Manish Mehta, who confirmed the report, said that Pakistan resorted to unprovoked firing in Saujian area of Poonch from 2.00 pm to 3.00 pm hours using small arms and mortars, forcing the Indian side to retaliate.
No casualties have, however, been reported so far. Pakistan has continuously been violating ceasefire across the LoC in Saujian from the past two daysFour civilians were injured on Thursday after the Pakistani Rangers violated ceasefire and resorted to unprovoked firing across the LoC, after which the Border Security Force (BSF) retaliated.