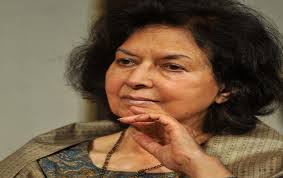 NEW DELHI: Nayantara Sahgal, niece of Jawaharlal Nehru, has case alleging that ‘Hindutva ideology’ was ruining the name of Hindus in the nation.
“The prevailing situation of the country is very pathetic. The Hindutva ideology which is going on in the country right now is ruining the name of the Hindus and as a Hindu myself, I am very hurt,” Sahgal said. She has been particularly critical about Narendra Modi’s silence over the entire issue where a Muslim man was killed by a raucous Hindu mob for allegedly consuming beef.

Sahgal has been widely attacked on Twitter by the right-wing supporters for being silent during many errors of omission and commission during the Congress regime. But as several books indicate, Nayantara Sahgal was one of the most bitter opponents of Emergency imposed by her cousin Indira Gandhi. Sahgal’s appointment as ambassador to Italy was cancelled by Indira Gandhi shortly after she returned to power.
24 Akbar Road: A Short History of the People behind the Fall and Rise of the Congress, a book written by veteran leader Rasheed Kidwai shares some interesting facets about the Sahgal’s protests during the heady days of Emergency. According to Nayantara, her activities were closely monitored and her telephone was tapped.
She was asked to show her book A situation in New Delhi to the censor board for permission but she refused to do so. Later, in A Voice for Freedom, Sahgal eloquently wrote that she felt sick seeing so many admired, veteran leaders in jail alongside other political workers.
There were apprehensions that Sahgal may be arrested under the Maintenance of Internal Security Act during Emergency but that never happened, though a close Indira aide, then West Bengal CM Sidhartha Shankar Ray, reportedly threatened to do so.
A rather interesting anecdote shared in KIdwai’s book suggests that Sahgal was so frustrated with Congress that she found the right wing Jan- Sangh a worthy alternative.
The book quotes Sahgal telling Subramanian Swamy, “People need to know that the Jan Sangh does not have three horns and a tail”. From that comment to now, not only has Indian politics undergone a tectonic shift, so has Nayantara Sahgal’s opinion on right-wing forces.