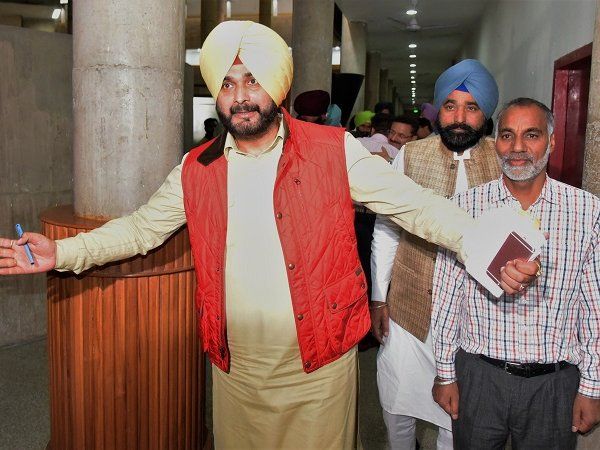 CHANDIGRAH: Barely 10 days after Captain Amarinder Singh stepped down as the state chief minister, Navjot Singh Sidhu put down his papers from the post of the Punjab Pradesh Congress Committee, a move that fuels the fire of a bitter political power tussle between the two.

The ongoing crisis in the Punjab Congress unit could prove ominous for the party as it prepares for re-election in the 2022 Assembly polls. Shortly after Sidhu tendered his resignation, former chief minister of Punjab Captain Amarinder Singh took to Twitter and said – “I told you so… He is not a stable man and not fit for the border state of Punjab.”
The hasty exit of Sidhu from the post of Punjab Congress chief just two-and-a-half months into his tenure yet again indicates that his objective was to dethrone Amarinder from the post of CM.
After stepping down, Amarinder Singh said that he had offered his resignation to interim party chief Sonia Gandhi three weeks back, but she had asked him to continue as CM. “If she had just called me and asked me to step down, I would have…As a soldier, I know how to do my task and leave once I am called back,” Singh had said.
Stressing that he has been in politics “for the last 52 years” and been chief minister “for nine-and-a-half years”, Amarinder alleged that Sidhu had a connection with Pakistan and that it would prove costly to the party. “The thing is that this is the third time the party called the MLAs. You have an element of doubt on me… I feel humiliated. As far as my future politics is concerned, there is always an option and I will use that option when time comes. I am in the Congress party. I will talk to my supporters and decide future course of politics,” he had told reporters after submitting his resignation to Governor Banwarilal Purohit on September 18.
Following his resignation, the Congress appointed Charanjit Singh Channi, believed to be a close confidante of Sidhu, as the Chief Minister. Channi, a Scheduled Caste Sikh, took oath on September 20 along with two deputies – one Jat Sikh and another Hindu.
Sidhu is believed to be upset over the recent developments in the state—from the non-inclusion of some Members of Legislative Assembly in the recently-expanded cabinet of Chief Minister Charanjit Singh Channi and the appointment of Punjab’s new Advocate General, Amar Preet Singh Deol.

Sidhu’s resignation comes amid the furor over Deol’s appointment. Deol, who has, among his various high-profile cases, represented Punjab’s tainted ex-DGP, Sumedh Saini, was appointed through an official notification on Monday. Chief Minister Charanjit Channi has defended the appointment saying that the controversial case was in the course of Deol’s professional duties.
Sidhu’s resignation has put the Congress in a spot. Sidhu had replaced Sunil Jakhar as Congress in June after much power tussle between him and former chief minister Amarinder Singh. Congress leadership was preparing to project Sidhu as the chief ministerial candidate for 2022 assembly elections before Charanjit Singh Channi was named chief minister after Amarinder Singh resigned in “humiliation” earlier this month.Sidhu’s resignation comes hours after new ministers in Channi’s cabinet were given portfolios.
Punjab is due to hold assembly elections early next year.
(Bureau Reports with Agency Inputs).