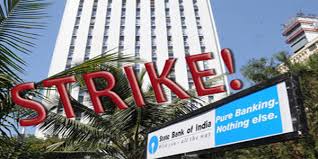 THIRUVANANTHPURAM : The United Forum of Bank Unions (UFBU) on Wednesday declared that their nationwide strike call for August 22 stands as the talks with the Indian Banks` Association (IBA) in Mumbai have failed.
The Forum is an umbrella body of nine unions in the Indian banking sector. The UFBU has given notice of a nationwide strike on August 22 to protest against reforms in the banking sector and other issues.

“Since nothing positive emerged (at the talks) on the issues raised by us, our call for strike on August 22 stands,” C.H. Venkatachalam, General Secretary, All India Bank Employees` Association (AIBEA), told IANS. “The IBA requested to withdraw strike without any concrete solution to the demands. Hence the strike call stands,” D. Thomas Franco Rajendra Dev, General Secretary of the All India Bank Officers Confederation (AIBOC) said.
The Chief Labour Commissioner has called the Forum for a conciliatory meeting in New Delhi on August 18. Among its demands are a halt to the moves aimed at privatisation of public sector banks and mergers and consolidation while not writing off corporate non-performing assets (NPAs).

Wilful default of loans has to be declared a criminal offence but accountability of the top management/ executives needs to be ensured. Stringent measures must be put in place to recover bad loans. Recommendations of a Parliamentary Committee for the purpose must be implemented.

The burden of corporate NPAs should not be passed on to customers in the form of higher service charges, nor should the Goods and Services Tax be used as a ruse to hike them. The UFBU has demanded the withdrawal of the proposed FRDI (Financial Resolution and Deposit Insurance) Bill as also scrapping of the Banks Board Bureau.

It is pushing for reimbursement of costs of demonetisation and other government schemes to banks; settlement of issues of employees and officers thereof; and filling up of posts of employees/ officers directors in banks.  The UBFU has demanded that the scheme for appointments on compassionate grounds be implemented and the gratuity ceiling under Payment of Gratuity Act, 1972, be removed.

Gratuity and leave encashment must be totally exempted from income tax on retirement. The pension scheme must be made on a par with the RBI/ Central Government scheme for past retirees. The erstwhile pension scheme in banks in lieu of NPS as a follow-up on record note of May 25, 2015, should be extended and adequate recruitment be made to all cadres.
×