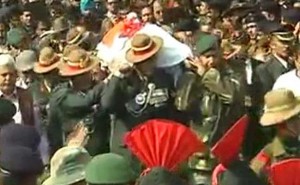 NEW DELHI : Colonel MN Rai, the 39-year-old who was shot while fighting terrorists in Kashmir, was given full state honours this morning at his cremation. Colonel Rai was martyred a day after receiving a gallantry award for his service in Kashmir.
His wife, two daughters and son were present in Delhi for the moving tribute to a braveheart. Top army officers including Chief Balbir Singh were present to honour the hero.
Colonel Rai the highest-ranking military officer to be killed in the region in nearly a year.
On Tuesday, the Colonel offered two terrorists a chance to surrender- they were holed up in a house in a village 30 kilometres from Srinagar. The terrorists ran out of the house and opened fire, killing the army officer and a policeman.Members of a Quick Reaction Team killed the two terrorists.
Colonel Rai was the Commanding Officer of 42 Rashtriya Rifles (42 RR) and was known to lead from the front.  When he was killed, his status on popular messaging service WhatsApp read, “Play your role in life with such passion, that even after the curtains come down, the applause doesn’t stop.”  That message was posted two months ago.
A policeman, Sanjeev Singh, was also killed in the encounter that the army described as an intense gun battle at a village in Pulwama in south Kashmir.
“It was my duty to shoot the enemy, and I don’t regret it. My regrets are for the people I couldn’t save: soldiers, buddies, innocents, etc,” says the policeman’s status message on WhatsApp, posted 48 days ago.
Colonel Rai was the youngest of 13 officers awarded the Yudh Seva Medal on Repiblic Day for killing a terrorist in a close battle last year. The Yudh Seva Medal is awarded for the highest degree of distinguished service in a war or conflict.