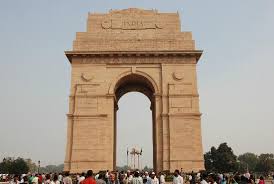 NEW DELHI : Defence Minsiter Arun Jaitley and armed forces chiefs paid tribute at the India Gate here to the martyrs who gallantly laid down their life for the nation in the 1999 Kargil conflict with Pakistan.
Jaitley along with Army Chief General Bikram Singh, Air Chief Marshal Arup Raha and Chief of the Naval Staff RK Dhowan paid homage to the martyred soldiers at the Amar Jawan Jyoti at the India Gate in the national capital.
“With regard to the war memorial, we have discussed various sites. India needs a war museum and as soon as the details are finalized, we will have to get sactions from all the departments of the government. It will take some time befo0re it’s completed. Whatever funds are required for that purpose, we will make it available,” said Jaitley. He also added that the best site available for the museum will be selected and also said that he may visit a prospective site soon.