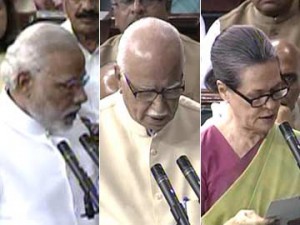 NEW DELHI : Narendra Damodardas Modi, the country’s 15th Prime Minister, today took oath as a member of the Lok Sabha. He was the first of the 539 MPs to be sworn in as a member of the 16th Lok Sabha on the second day of its inaugural session. Former Union minister Kamal Nath had yesterday been administered the oath as pro-tem speaker by President Pranab Mukherjee.
Mr Modi was followed by former deputy prime minister L K Advani and Congress president Sonia Gandhi in the swearing-in ceremony of the newly-elected MPs. They were followed by PA Sangma (National People’s Party), Arjun Charan Sethi (Biju Janata Dal), and Biren Singh Engti (Congress). The last three leaders will assist Mr Nath in swearing the new MPs in.
Home Minister Rajnath Singh was first of the Cabinet Ministers to take oath, followed by Sushma Swaraj, who used Sanskrit language to be sworn in. Railway Minister Sadananda Gowda took the oath in Kannada, his mother tongue.The ministers of state will be sworn in after their senior ministers. They will be followed by members from various states and union territories, in alphabetical order.
Attired in a white kurta and white jacket, Mr Modi greeted the Congress president with folded hands when he reached her seat while going around the well after taking oath. He shook hands with the pro-tem speaker, and was greeted with a loud thumping of desks by the members.
The total strength of the Lok Sabha is 543, but its effective strength stands at 539 now. Mr Modi has resigned from Vadodara, one of the two seats he contested. Samajwadi Party president Mulayam Singh Yadav has quit his Mainpuri seat, while retaining Azamgarh. Telangana Rashtra Samithi chief K Chandrasekhar Rao relinquished his Medak seat after becoming the chief minister of India’s 29th state.
The Beed Lok Sabha constituency fell vacant after union rural development minister Gopinath Munde died in a road accident in the capital on Tuesday.