VADODARA  : Vadodara: In overt symbolism, a tea vendor was one of the five people who proposed Narendra Modi’s name as the BJP’s prime ministerial candidate filed his nomination papers today as the party’s candidate from Vadodara in Gujarat.
Hundreds of slogan-shouting supporters in saffron Gandhi caps and Modi masks and holding big cut-outs of the BJP’s lotus symbol and many party flags, lined a four-km stretch that Mr Modi drove down to reach the district collectorate to file his papers.Mr Modi, in red jacket, was in an open jeep waving to a massive crowd as the vehicle inched forward. 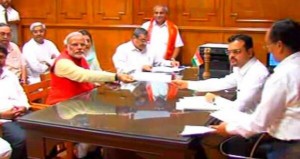 At the district collectorate, Kiran Mahida, a tea seller, was among those who proposed the candidacy of Mr Modi, who is also Gujarat’s chief minister.  A big portion of Mr Modi’s election campaign has been built around his modest beginnings as a young boy who sold tea on trains.The Congress has fielded Madhusudan Mistry, a close aide of party number 2 Rahul Gandhi in Vadodara.
Even in a state that Mr Modi has comprehensively won over the last 12 years, Vadodara stands out as a BJP stronghold; the party had won the seat by almost 1.5 lakh votes in 2009. Six of the seven assembly segments in Vadodara are held by the BJP. The seventh was won by an Independent, who soon joined the BJP fold.Mr Modi is also contesting a second seat, Varanasi in Uttar Pradesh.