VARANASI: In a searing speech just outside Varanasi, Narendra Modi, the BJP’s prime ministerial candidate, tore into the ruling Congress for what his party calls a “ban” on him in the city from where he is running for Parliament.”The Congress must understand. The people have defeated you, the Election Commission can’t make you win,” Mr Modi said in Rohiniya, even as a full panel of the Election Commission held a rare press conference to make its stand on the controversy clear.
Mr Modi said, “Why am I being stopped? My silence has more strength than my speech and Ma Ganga I will return tomorrow.”
From Rohaniya, his motorcade will drive into the city and through it, to his party’s headquarters. 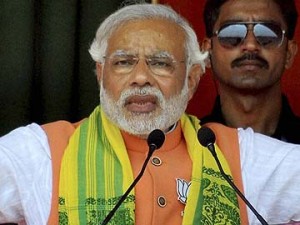 In Delhi, Election Commissioner VS Sampath said, “We have taken note of rather harsh and sweeping allegations made against the Election Commission by certain parties.”Earlier, for about three hours, party workers shouted slogans and protested against the Election Commission at the Lanka Gate outside the historic Banaras Hindu University, in scorching heat, led by top leaders Arun Jaitley and Amit Shah.
The BJP has demanded the removal of Returning Officer Pranjal Yadav, who reportedly denied permission for Mr Modi’s proposed rally at Benia Bagh in Varanasi today. The BJP had planned three Modi events today. While permission for the rally was denied, clearance for the other two – prayers on the banks of the Ganga and a meet with 150 citizens at a local hotel – came last evening. Mr Jaitley told NDTV, “Why should we do Ganga pujan when permissions were sent at 2 am?” His challenger, Arvind Kejriwal, retorted, “If you only want to do Ganga arti, you don’t need permission. You need EC permission for political activities.”Varanasi votes on May 12 on the final day of the staggered national election. Ajay Rai of the Congress is up against Mr Modi and Mr Kejriwal.