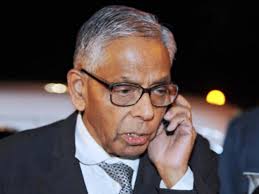 KOLKATA: M K Narayanan, who quit his office of governor, the other day flown back to his home in Chennai this late afternoon. Incidentally, Narayanan, who could stay in Raj Bhawan for four years, happens to be one of the governors left their offices, after BJP-led NDA came to power.
Narayanan was given a warm farewell by Governor house staffers yesterday and a warm send off by State Finance Minister Amit Mitra, State Chief Secretary Sanjay Mitra, State Home Secretary Basudeb Bandhopadhya and Kolkata Police at airport as he was flown to Chennai, his home. Earlier, Chennai described his experience in Bengal as unforgetable.
Incidentally, President Pranab Mukherjee, according to a release from Raj Bhawn appointed Bihar Governor D Y Patil as acting Governor of West Bengal.