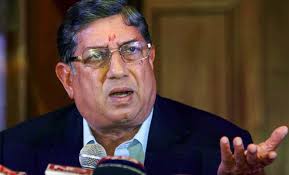 The top court also said that Sundar Raman can continue as the Chief Operating Officer of the Indian Premier League. The interim BCCI president Sunil Gavaskar has recommended that Sundar Raman can continue, the court informed.The Supreme Court’s mood has been explosive. Justice AK Patnaik, one of the two judges who had heard this case throughout, is retiring on June 3. Before going, will he make some landmark decisions in a bid to rid Indian cricket of betting and match-fixing? On March 25, the Supreme Court bench slammed Srinivasan saying: “It’s nauseating that N. Srinivasan continued as BCCI chief, he should go if cricket has to be cleaned.” But Srinivasan is in no mood to throw in the towel easily.
Here’s a look back at the top 10 developments of the 2013 IPL betting and spot-fixing scam (latest first): 1. On April 15, Srinivasan files an affidavit saying the Supreme Court should reinstate him as BCCI president. Srinivasan says he is innocent and allegations of conflict of interest were baseless. He also says that he never tried to hide the real identity of his son-in-law Gurunath Meiyappan, who has been indicted by a court-appointed inquiry committee for betting and sharing team (Chennai Super Kings) information. 2. On April 11, Supreme Court refuses to hand over to BCCI lawyers the audio recording of statements made by Dhoni, Srinivasan and Indian Premier League Chief Operating Officer Sunder Raman. All three had deposed before the Justice Mukul Mudgal probe panel. The tapes are in a sealed envelope in possession of the bench. 3. On April 11, suspended IPS officer Sampath Kumar wants Special Investigation Team to probe BCCI and players linked with Indian Premier League match-fixing and betting scam. He files a petition in the Supreme Court saying his transfer and suspension from Tamil Nadu crime branch was motivated and an act of a powerful lobby trying to hush up the IPL scandal. 4.
On April 9, BCCI moves a petition requesting the Supreme Court to share transcripts of the audio tapes containing conversation between the probe panel and Dhoni among others. The petitioner’s counsel charged Dhoni for not revealing the real identity of Meiyappan. Dhoni apparently told the panel that Meiyappan was “an enthusiast” when Srinivasan’s son-in-law actually ran the CSK show.
5. On March 28, Supreme Court suspends Srinivasan as BCCI president. In its interim order, the court says Srinivasan will be replaced by former cricketers Sunil Gavaskar and Shivlal Yadav. Gavaskar was given charge of IPL affairs while Yadav was entrusted with non-IPL issues. This is the first time when a top court ‘suspended’ a Board official. Court says final hearing on April 16.6. On March 25, the court slams Srinivasan for corruption in Indian cricket. The judges rebuke the 69-year-old Tamil Nadu strongman for conflict of interest and say he must go to rid cricket of corruption.7. On March 7, BCCI lawyers tell the Supreme Court not to reveal details in the sealed envelope as it contains “speculative and baseless charges against leading cricketers.”
8. On February 10, the Justice Mudgal-led panel submits it report to the Supreme Court. It submits two reports and a sealed envelope that has confidential but unverified content. 9. In October, the Supreme Court appoints a three-member committee headed by a retired judge (Mukul Mudgal) to probe allegations of betting and match-fixing. The panel gets four months to file its report.
10. The case dates back to June 2013 when the Cricket Association of Bihar secretary Aditya Verma raised the issue of conflict of interest in the formation of a BCCI commissioned two-member inquiry panel. Retired judges T Jayaram Chouta and R Balasubramanian found “no evidence of any wrongdoing” on the part of Meiyappan and Rajasthan Royals co-owner Raj Kundra. Verma filed a PIL in the Bombay High Court. The judges termed the probe panel “illegal”. The BCCI challenged the Bombay High Court order in Supreme Court.