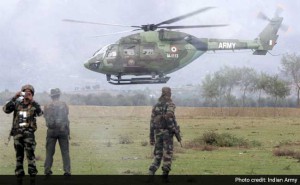 NEW DELHI: Planning for the massive Indian Army operation against militants that saw surgical strikes inside Myanmar, began about five days ago, sources have told . National Security Advisor Ajit Doval skipped a Bangladesh visit over the weekend with the Prime Minister and camped in Manipur. So did Army Chief Dalbir Singh Suhaag, who canceled a visit to UK.
Both men made a trip to Manipur to make an on-ground assessment of the operation as it was being given shape and played a critical role in building its architecture.”Cutting edge Intelligence” made it possible for India’s Special Forces to identify to the last detail the two militant camps that were to come under strike.
Assisted by Mi-17 helicopters of the Indian Air Force, the Indian Army’s para commandos struck two camps of militants and “inflicted significant casualties.” The two camps are estimated to have had a total of about 150 militants and both were liquidated. Casualties have been pegged at at least 50, but could be much higher, even as much as 100 or more, said sources. Some militants may have escaped, but most were killed, they said.
The operation, the sources said, began in the dark at 3 am on Tuesday and was declared over officially only in the afternoon, after mopping up. Minutes before ops began, India’s military sent a communique to the Myanmar Army.
At the diplomatic level, the Indian ambassador met a minister in the Myanmar government as government offices opened – this would be about 9 in the morning at which point the sensitive operations were already well underway. Effectively, this was a solo operation by the Indian Army aided by the Indian Air force, not just on the ground, but also in the planning and implementation.
The Army launched its counter ops after frequent strikes by militant groups in the region. On June 4, militants ambushed an Army convoy and killed 18 soldiers in the Chandel district of Manipur, the deadliest attack in two decades.
India does not expect any controversy or row over its troops crossing into Myanmar in hot pursuit of the militants as there is a treaty between the two countries from the 1990s on operations across the border. Further, an agreement also permits locals on either side of the border to come and go across it within a range of 15 km on either side.
But, sources say, the political decisiveness of the Prime Minister – Narendra Modi himself sanctioned the ‘hot pursuit’ after the ambush and death of the 18 soldiers in Manipur – marked a shift in the security doctrine. The Prime Minister’s Office is reported to have monitored the sensitive operation in real time.
In its statement after the operation the Indian Army said it was in communication with Myanmar and that, “There is a history of close cooperation between our two militaries. We look forward to working with them to combat such terrorism.”
The Army also said, “While ensuring peace and tranquility along the border and in the border states, any threat to our security, safety and national integrity will meet a firm response.”
Apart from asserting the strength of the Indian State, the operation is also seen to send a crucial message to China, which has, according to Indian intelligence sources, been supporting varied militant ultras in the North East. Just recently intelligence sources argued that ULFA commander Paresh Baruah had sought refuge in the Yunan Province of China.
When asked if this rare cross border operation would come to be a template for similar operations on other borders when it came to tackling terrorism, former Army Chief General VP Malik explained, “I don’t think we are going to revise our counter-insurgency doctrine for this purpose.
The counter-insurgency doctrine is much broader and gives these kinds of permissions, the only thing is you have to inform the MEA, take permission from the PMO when you are crossing the border. So I don’t think the Indian Army needs to revise its doctrine.
I don’t think the political authority is going to say anything. Yes, it indicates the Indian Army is now capable of taking prmpt and bold action of this nature if it is required. It depends on the circumstances, what kind of action we take. Here, the circumstances suited us, so the Indian Army has taken that action.”