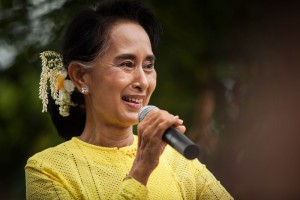 MYANMAR: The party of Myanmar opposition leader Aung San Suu Kyi won all 12 of the parliamentary seats declared in the first round of results after Sunday’s general election, according to the country’s election commission.
The 12 seats, all in the country’s largest city, Yangon, went to the National League for Democracy (NLD), Union Election Commission Chairman Tin Aye told a news conference.
Earlier, Myanmar’s ruling party conceded defeat in the country’s general election on Monday as the opposition led by democracy figurehead Aung San Suu Kyi appeared on course for a landslide victory.
“We lost,” Union Solidarity and Development Party (USDP) acting chairman Htay Oo told Reuters in an interview a day after the Southeast Asian country’s first free nationwide election in quarter of a century.
The election commission has not yet announced any results from Sunday’s poll, but Suu Kyi’s National League of Democracy (NLD) said that partial counts showed it had won more than 80% of votes cast in the densely populated central regions.
NLD spokesman Win Htein said that outside the central area, the Nobel peace laureate’s party had so far won more than 65% of votes cast in the states of Mon and Kayin. Results from the five other states were not yet known, he added.
It was not yet clear whether the NLD would win the two-thirds of seats in parliament it needs to form the first democratically elected Myanmar government since the early 1960s. But, with a first-past-the-post system for winning constituencies, a commanding lead in the popular vote makes it likely.
The election was a landmark in the country’s unsteady journey to democracy from the military dictatorship that made it a pariah state for so long. It is also a moment that Suu Kyi will relish after spending years under house arrest.
PERIOD OF UNCERTAINTY
Whatever the result, Myanmar is heading into a period of uncertainty over how Suu Kyi and other ascendant parties negotiate sharing power with the still-dominant military.Suu Kyi started the contest with a sizeable handicap. The military-drafted constitution guarantees one-quarter of parliament’s seats to unelected members of the armed forces.
Even if she gets the majority she needs, Suu Kyi is barred from taking the presidency herself under the constitution written by the junta to preserve its power. Suu Kyi has said she would be the power behind the new president regardless of a constitution she has derided as “very silly”.
The military will, however, retain significant power. It is guaranteed key ministerial positions, the constitution gives it the right to take over the government under certain circumstances, and it also has a grip on the economy through holding companies.
Incomplete vote counts showed some of the most powerful politicians of the USDP trailing in their bids for parliamentary seats, indicating a heavy loss for the party created by the former junta and led by retired military officers.
Among the losers was USDP chief Htay Oo, who told Reuters from the rural delta heartlands that are a bastion of support for his party he was “surprised” by his own defeat.
National League for Democracy (NLD)Aung San Suu KyiHtay OoUnion Solidarity and Development Party (USDP)Myanmar electionsMyanmar elections 2015.